How To Get There And Where To Park

The stadium is located in the North East of Manchester.

From the South M6
Leave the M6 at Junction 19 and follow the A556 towards Stockport and then join the M56 going towards Stockport. Continue onto the M60 passing Stockport and heading on towards Ashton Under Lyne. Leave the M60 at Junction 23 and take the A635 towards Manchester. Branch off onto the A662 (Ashton New Road) towards Droylsden and Manchester. Stay on the A662 for around three miles and you will reach the Stadium on your right.

From The M62
Leave the M62 at Junction 18 and then join the M60 Ashton Under Lyne.  Leave the M60 at Junction 23 and take the A635 towards Manchester. Branch off onto the A662 (Ashton New Road) towards Droylsden/Manchester. Stay on the A662 for around three miles and you will reach the Stadium on your right.

Whilst Iain Macintosh informs me; 'I find this an easier route to the ground; Leave the M60 at Junction 24 and take the A57 (Hyde Road) towards Manchester. Turn right onto the A6010 (Pottery Lane). There are quite a number of unofficial car parks on both sides of Pottery Lane, costing around £5 per car. Pottery Lane becomes the Alan Turing Way and goes right past the stadium on your left'.

There is some parking available at the stadium itself which costs £10 per car, £20 per minibus, whilst motorcycles are free. The East Car Park is nearest to the away entrance. Please be aware that there is a residents only parking scheme in place in the streets near to the ground, which extends about a mile out from the stadium. So if you want to street park, it means parking further away and then walking to the stadium. Some unofficial car parks have sprung up mostly charging around £5 per car. Terry Ireland a visiting Chelsea fan adds; 'Plenty of car parking spaces were available when we arrived at the stadium around two hours before kick off. However, getting out after the game was a joke.  It’s a little like a free for all and took us nearly an hour to exit the car park and be on our way. Meanwhile the unofficial car parks, all but 400 yards away, had cleared, been locked-up and were long gone by the time we passed them on our way home. And they cost the same to park!'

Peter Llewellyn informs me; 'The road links are busy even on non-match days so make sure you allow plenty of time. The stadium is part of Sportcity so car users should follow the brown Sportcity signs until near the stadium'. 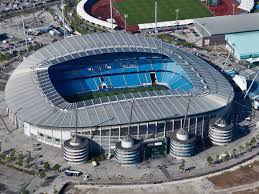 The stadium now has its own Metrolink stop on the East Manchester line, called Etihad Campus; this is only a five minute walk from the away end. Trams can be caught from either Victoria or Piccadilly railway stations (or Market Street or Piccadilly Gardens in the city centre), taking a tram towards Droylsden, calling at Etihad Campus (which is on the north side of the stadium, next to the outside catering and toilets at City Square) and then Velopark (south east side of the stadium, near Asda, which is slightly nearer the away fans stadium entrance, but please note this station is closed after the game has ended). Trams are frequent on matchdays (every 6 minutes). The journey time from Piccadilly Station to the Etihad Campus stop is 8 minutes. A return ticket for this journey costs £2.90 for adults and £1.40 for children. Pre-recorded passenger information such as the names of station stops are read out by individual Manchester City players and management!

The new Metrolink stop also makes it easier to park near the motorways and get a tram into the city as the Metrolink has other lines into the city from Oldham, Eccles and Altrincham with parking facilities at several (e.g. at Ladywell near the M62/M602 from Liverpool and Whitefield (near M60 junction 17). For a PDF map showing the stops around the stadium visit the Metrolink website.

The closest railway station is Ashburys which is a short five minute train ride away from Manchester Piccadilly Station. The stadium is about a 15 minute walk away from Ashburys station. As you come out of the station turn left and after proceeding up the road you will come to the stadium on your left.

Otherwise if you have time on your hands then you can embark on the 20/25 minute walk from Piccadilly Station to the stadium. At the bottom of the main station approach turn right into Ducie Street. At the end of the road turn right onto Great Ancoats Street. Cross over the road, then the canal and turn left into Pollard Street - this is well marked as a walking route to "Sportcity". Continue straight along Pollard Street which leads onto the A662 Ashton New Road and you will come to the stadium on your left.

A shorter route from the station is to use the new exit to Fairfield Street (the taxi rank). As you come off the platforms, it’s in the left hand corner of the main concourse. Lifts or escalators down. (There’s also an exit from the little concourse off the bridge near platforms 13/14.) At the street exit head toward the railway over bridge, under that, then left again under the railway (Travis Street continuing into Adair Street), left at the end and right into Pollard Street (then as above).

Alternatively you can get a taxi from Piccadilly Station (around £6) or a bus from Piccadilly Gardens -  Go down the main approach from the station, then along London Road to Piccadilly Gardens; normal service buses (216 and 231) leave from the right (north) side of the Gardens (between Lever Street and Oldham Street) and special matchday buses just across the road - £1.50 each way. Service 53 runs round the city's ring road and past the stadium. On the return, the special buses leave from Ashton New Road just across from the away end.

Thanks to Steve Parish for providing the above directions and bus information. 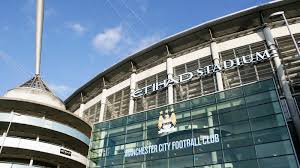 Away fans are located in one side of the South Stand at one end of the ground, in both the upper and lower tiers, where up to 3,000 fans can be accommodated (4,500 for cup games). The view of the action is pretty impressive although the atmosphere within the stadium is a bit 'hit and miss' at times. I did hear though on my last visit one very good rendition of the Man City fans anthem 'Blue Moon'. My only real complaint was the lack of distance between the home and away supporters. Only a few seats and a row of stewards stood in-between the two sets of fans, which led to a lot of unpleasant baiting between the two. And of course it was always the away fans who were adjudged to be causing the problems by the stewards (although I'm sure that if I visited on another occasion I probably would have seen the same Man City fans baiting in the same manner) and this led a number of away fans on my visit being escorted out of the stadium.

The facilities are also pretty good with spacious concourses and large plasma flat television screens showing the game. There is also the usual selection of food on offer; including Hot Dogs, Burgers, Chicken Burgers, Chips and a range of pies, although the latter are a bit expensive at £3.50 each.

After the game has finished fans are kept apart immediately outside via a large fence which is erected by the Police, which seems to lead to a lot of exchanges of unpleasant abuse. Some away fans have suggested that it may be best to keep colours covered on making your way back to your transport. It is also worth noting that entrance to the stadium is gained by placing your ticket into an electronic reader, which normally causes confusion to some fans. Please note that you are likely to be searched by stewards at the turnstile entrance.

Ed Jones informs me; 'There is now a large area just outside the stadium, where supporters can drink and eat in a covered area, which is open before and after matches. There are two large bars, one for food and one for drinks. Food includes Steaks, Burgers, Curries, Rice, Chips, Pizza etc.. All kinds of drinks are served in the Summerbee bar. There is a huge stage, with accompanied lcd screen which shows match highlights, and usually has live interviews which ex players, personalities etc.. The facilities are open to all fans, however, this may be different for a derby match'. 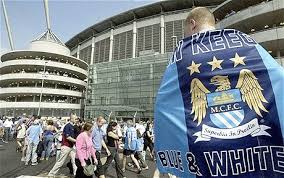 There are not a great deal of pubs around the stadium, and the few available are predominantly for home support. However, 'The Stanley' (aka Sports Bar) pub does let in away fans in small numbers. It is about a ten minute walk away from the stadium, just set back from the main A6010 (Pottery Lane), going towards Ashburys train station. The easiest way to find it is to locate the large Asda store behind one side of the stadium (there is also a McDonalds outlet next door to the store, plus there is a cafe located inside it) and on facing the superstore turn right and proceed down the main road, you will come to the pub on the left. It does cost £1 for adults to enter the pub, (they even stamp your hand as if you were entering a night club) but children are at least admitted free. Inside there is a large screen showing SKY Sports, good service and a good mix of home and away support.

Alan Finneran informs me; 'I would recommend the Townley on Albert Street, which is only a five minute walk away from the stadium. The pub has a good atmosphere and as long as away fans arrive early and are discrete (i.e. no colours) then they should be okay. Also the Manchester City Supporters Club have their own City Social bar opposite the North Stand. I have seen opposition supporters in there now and again, so if you are a member of your own team's supporters club, then your branch secretary may be able to arrange a visit to the Social bar in advance'.

Dave Clinton adds; 'If you want a pint beforehand then it is probably best to drink in the city centre. My tip, would be to head to the Printworks in Manchester, near Victoria station. There is a connecting tram service from Piccadilly. There are loads of pubs at the Printworks, with plenty of choice of food. The pubs around Piccadilly itself are not too clever. However Deansgate or around the Town Hall, would be a good place to head for if you are taking in the City centre. This is about a 30 minute walk away from the stadium'. A taxi to the ground would then cost in the region of £7.

Chris Fogarty warns; 'away fans should avoid the Queen Victoria pub at the bottom of Grey Mare Lane'. Also Mary D's on Grey Mare Lane is also not recommended for away supporters as well as pubs on Ashton New Road (both these roads are in the area behind the away end of the stadium). Otherwise alcohol is available inside the stadium (Singha £3.60, Fosters £3.40, Strongbow £3.40, John Smiths bitter £3.20).