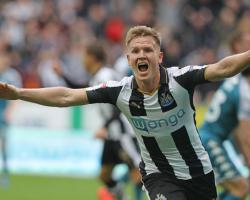 On a bizarre night at St James' Park, Ritchie struck a stunning winner in the 68th minute to secure the win that keeps Newcastle 10 points clear of third-placed Huddersfield and one ahead of title rivals Brighton.

The Scotland international, along with the rest of Tyneside, must have feared it was not going to be their night after seeing referee Keith Stroud controversially rule out his first half spot-kick.

Mystery surrounded the decision from Stroud and his assistant, Matthew McGrath, to award Burton an indirect free-kick in their own penalty area after Ritchie had converted.

The official explanation from Newcastle, after being told at half-time, was the decision boiled down to a foul on the edge of the box as the kick was taken

Replays suggested otherwise, while encroachment would have seen it retaken.

Given what Burton did to Huddersfield at the weekend, winning late, Newcastle must have been prepared for a tough night and that was how it transpired.

The hosts started brightly enough, fresh from beating Wigan on Saturday, and Rafael Benitez's decision to freshen things up looked like it would gain instant rewards.

It was not as simple as that

Burton, still threatened by relegation, dug in to frustrate the home side in the first half and prevented an early goal.

As well as seeing Ayoze Perez, Ritchie and Jonjo Shelvey miss the target, there had already been one Dwight Gayle penalty appeal waved away when he went down under a challenge from John Brayford.

That was inconsequential given what followed

Burton might have gone ahead themselves beforehand, with Jackson Irvine powering a first time volley a couple of yards over from just inside the box.

There were claims from Burton that Gayle had dived in the area after being tripped by Tom Flanagan, but the spot-kick was given anyway.

Ritchie converted while Gayle encroached so the goal did not count

Rather than a retake, though - as per Football Association rules - the free-kick was handed to Burton.

That led to huge protests and utter mystery for the controversial decision that went against Newcastle.

Their supporters made the noise, the players tried to make up for the officials' actions, and Perez was first to go agonisingly close to scoring

Ritchie, denied by Burton goalkeeper Jon McLaughlin, was next.

There were further chances for Shelvey and Mohamed Diame before the opening goal finally arrived with 22 minutes remaining.

Ritchie found space on the edge of the area to shape and curl a brilliant right foot shot inside McLaughlin's far corner to give Newcastle the crucial advantage and that was how it remained.