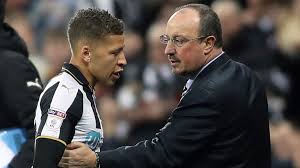 The Black Cats are sinking rock bottom in the Premier League and only a miracle can save them from getting relegated.

Kilbane said that he would like to see Moyes given a chance to turn the club’s fortune around even if he takes them down to the Championship.

The BBC pundit is convinced that Moyes is capable of the rebuilding job required at the club. The question to be pondered on is whether they can do what their derby rivals, Newcastle United, have done this season.

Newcastle are certain to get back into the Premier League under Rafael Benitez this season after getting relegated in 2015-16.

Kilbane has underlined the difference between Moyes and Benitez, saying that the former manager of Manchester United has not really done much to win the fans over.

When Benitez was appointed in March, the Geordie fans were right behind him, and they are reaping the rewards now. He wrote in his column on BBC Sport:

There was a real positivity about Benitez when he was appointed in March 2016 and, at the end of the season, the fans were right behind him, saying the club had to persuade him to stay. They did, and they are reaping the rewards now.

I don’t think there is anything like the same feeling towards Moyes on Wearside as there was towards Benitez on Tyneside.

When I listen to 606 on BBC Radio 5 live and hear Sunderland fans ringing in, there is no affection towards Moyes.

When I’ve gone to Black Cats games this season, I’ve not got the impression their supporters have any real confidence in him either.

Sunderland are 20th in the Premier League, eight points away from safety with just seven games left to play. Newcastle, on the other hand, are second in the Championship, two points behind Brighton.