Miss Of The Season? 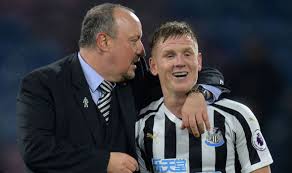 "If we had dropped two points you would be walking home, son!"?

Newcastle climbed further away from the Premier League relegation zone with a third consecutive victory and their first at Turf Moor in more than 40 years.

But a miss from Matt Ritchie defied belief. Did Rafa really tell him: "If we had dropped two points you would be walking home, son!"?

Federico Fernandez scored the opener in the 2-1 victory in only the fourth minute via a big deflection off Ben Mee and Ciaran Clark, in for the injured Paul Dummett, made it two 19 minutes later.

Burnley pulled one back through a fine header from Sam Vokes five minutes before the break but were unable to find an equaliser and Sean Dyche's side remain just above the bottom three.

Newcastle would surely have won with greater comfort but for an extraordinary miss from Matt Ritchie while Joselu hit a post.

The game kicked off half an hour late after referees' assessor Eddie Wolstenholme collapsed in the tunnel and was taken to hospital, and Dyche would have been furious with sloppy play from his side that allowed Newcastle first to threaten and then to score.

Chris Wood failed to clear a corner and Mee then threw a foot at a weak Fernandez shot, sending the ball flying into the top corner.

Newcastle surely could not believe their luck, and the goal allowed them to stick to their compact shape and invite Burnley to try to play through them.

The hosts' attempts to do so were largely woeful and the frustration from their fans was growing even before more poor defending allowed Newcastle to double their lead in the 23rd minute.

The Clarets' success last season was built on a rock solid defence but it has been a radically different story so far this term and Clark was left unmarked to glance in a Ritchie cross after Newcastle took a corner short.

But the game changed with a goal out of nothing for the home side in the 40th minute. Mee's long ball forward looked speculative but Clark allowed Vokes to drift off him and the Welshman rose just inside the box to loop a header over Martin Dubravka, who was a long way off his line.

Burnley almost equalised with a rare moment of quality in a frantic end to the half as Vokes headed down for Wood to fire in a volley that Dubravka did very well to push behind.

Ayoze Perez then took exception to an arm in the face from Steven Defour, although it appeared accidental, and referee Anthony Taylor kept his cards in his pocket.

The whistle came at the right time for Newcastle and the start of the second half again saw the away side possessing the greater impetus.

Only Ritchie will know how he did not restore their two-goal advantage five minutes in.

More weak defending from Burnley allowed DeAndre Yedlin to break into the area. Hart got a toe to the American's cross-shot but could only divert the ball into the path of Ritchie who, from a couple of yards out and with a completely open goal in front of him, somehow hit his shot wide.

Ritchie and Salomon Rondon then got in each other's way as another decent opportunity presented itself, and Burnley at last set about trying to take advantage of their good fortune.

Strong link-up play from Vokes and Wood saw the latter fire another shot at Dubravka, before a fine last-ditch block from Yedlin denied the New Zealander again.

Wood's third chance was the best of the lot but he got his connection all wrong when Aaron Lennon cleverly hooked the ball back and sent it flying over the bar.

Newcastle then came agonisingly close to a third once again when a fine break saw Perez set up substitute Joselu, who went for power and struck the woodwork.

Hart played as an outfield player during four minutes of added time but it was to no avail as Newcastle claimed a rare Monday night victory and a first on the road this season, after Vokes headed over from close range. It was no more than the visitors deserved.