Mills 'Players Not Good Enough To Move On'!

Danny Mills believes Newcastle United will be able to keep their best players - because none of them are good enough for the 'top teams.' 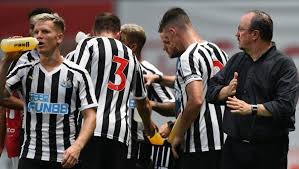 With Rafa Benitez leaving his role as manager on June 30th, fans are worried that several players could follow the Spaniard out of the door.

Ayoze Perez has been strongly linked with a move to Valencia, while Fabian Schar's debut campaign in the Premier League has also won him admirers.

Yet Mills, who is now a pundit, doesn't believe that Newcastle fans should worry about holding onto their star players.

"I think they will be able to keep them," he told Football Insider.

"They are not in a financial crisis where they need to sell. Mike Ashley is shrewd enough to took at it and run it as a business.

“Mike Ashley doesn’t need to sell and can keep his best players. It then depends on which managers come in and who he wants.

“I don’t think there is a brilliant player at Newcastle who lots of top clubs will want. There’s no-one in that squad who makes you say, ‘wow, he’s irreplaceable’. Who are the stars in that team?

“You have a nucleus of a decent squad and it needs three or four quality signings this summer. There no-one who can’t be replaced.”