Newcastle remain in 18th place in the Premier League and two points adrift of safety.

“I think if we’d have had Olivier Giroud, we’d have comfortably won the game,” said head coach McClaren, who has opted not to recall forward Adam Armstrong from Coventry City.

“That’s the difference in football. You’re always searching for that.

“But unfortunately at the present moment, Riviere is injured, or at least coming back from injury, and Papiss Cisse, who is a goalscorer, is injured for the next two or three months.

“We’ve got other goalscorers in there. We just need to step up to the plate and start scoring and doing our job.”

McClaren, on the club’s board, again refused to admit that the club was even looking to sign a striker in this month’s transfer window after the Arsenal game.

However, he talked about “private” discussions at the club.

The 54-year-old said: “We’ve been working behind the scenes, and we will carry on doing that tirelessly.

“The business that we are going to do will stay private, within the four walls. When we’ve got something to tell you, you’ll know.” 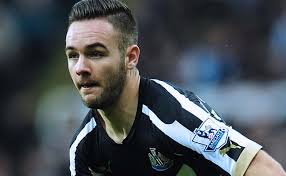 Meanwhile, Armstrong netted his first senior hat-trick in Coventry’s 5-0 win over Crewe Alexandra on Saturday to take his League One goal tally for the season to 16.

McClaren has indicated that the 18-year-old’s half-season loan at the Ricoh Arena will be extended.

However, Coventry manager Tony Mowbray said: “I don’t think it’s rubber-stamped, so we have to be cautious until Newcastle agree everything.”

Newcastle will insist on a recall clause in Armstrong’s loan extension deal.