McClaren Stays In Job For Another Week 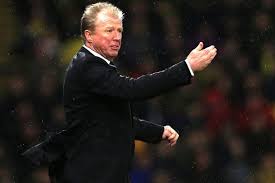 Newcastle boss Steve McClaren, who said he "couldn't believe" the penalty awarded against Mbemba, was delighted with the way his players, watched by new signings Jonjo Shelvey and Henri Saivet, fought for their point.

He said: "We were talking about 'Boring, boring United' and Newcastle having questionable character - I think both teams showed that that's not true. We said it might be a 0-0 and it's ended up a 3-3.

"Manchester United are a quality team and they keep the ball and they control it once they're in front. You don't realise what a monumental effort that is, to come back from 2-0 and 3-2, and to perform as we did."

It proved to be a good day for McClaren, who revealed his delight at the acquisition of Shelvey in particular.

He said: "When I came in in the summer and we were looking at quality players and young players and English players, we tried to get Jonjo Shelvey then.

"It wasn't to be, but I am delighted to get him now. He's 23, he's English, he's in the England team and I think he's got more to come, and certainly will add quality and character to this team."