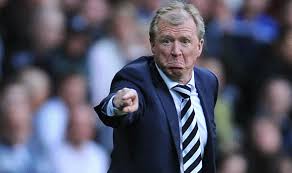 The 54-year-old reported for duty as usual as he continued preparations for Monday's night's trip to Barclays Premier League leaders Leicester amid frenzied speculation in the wake of Saturday's humiliating 3-1 home defeat by Bournemouth.

That proved to be the final straw for disgruntled fans, who have seen the Magpies fail spectacularly in their challenge to secure a top-eight finish and progress in the domestic cup competitions under McClaren.

However, it remains to be seen if the former England boss reached the end of the road with his employers too, although the point at which they will have to jump one way or the other is fast approaching with the trip to the King Power Stadium looming large.

Three members of the club's football board - managing director Lee Charnley, chief scout Graham Carr and club ambassador Bob Moncur - met on Monday in the absence of the fourth, McClaren, and the club has spent the time since sounding out possible replacements.

Sources close to former Real Madrid boss Rafael Benitez indicate the Spaniard would have a qualified interest in any vacancy.

Benitez is available after parting company with Real in January, as are former Everton and Manchester United boss David Moyes and ex-Liverpool manager Brendan Rodgers, the names featuring most prominently in the bookmakers' odds.

However, with no transfer window in which to remodel a squad short of both goals and defensive resilience, and just 10 games remaining in which to drag the club out of the relegation zone and across the finishing line, the job is not the attractive proposal it may have been in the past and the very real prospect of at least a season in the Sky Bet Championship is a major drawback.

In addition, the club's modus operandi is one which may not suit all potential candidates, although McClaren did have at least a say in its January transfer business, if not its summer recruitment drive.

Either way, Newcastle need to make a decision sooner rather than later and sources on Tyneside have indicated that there could be significant developments over the next 24 hours.