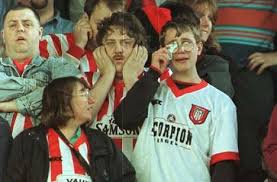 And that "special match" created an even bigger roar from the Geordie fans at St James' Park when it was read out, than Gabriel Obertan's goal!

Ronald Koeman's dream start as Southampton boss hit new heights as his side soared to a 8-0 win against hapless Sunderland at St Mary's.

A farcical 12th-minute own goal from Santiago Vergini set the tone for an afternoon Black Cats boss Gus Poyet will wish to forget, before Graziano Pelle and Jack Cork put the game out of sight before the break.

Sunderland looked guilty of giving up once Liam Bridcutt fumbled his side's second own goal in the 63rd minute, with Pelle, Dusan Tadic, Victor Wanyama and Sadio Mane piling on the embarrassment.

Gus Poyet: "Where do I start? First, it was the most embarrassing (moment) I've had on a football pitch without any doubt.

"I feel sorry for the supporters. I thought we were creating something between the team and the supporters - they made a long trip and they deserved better. What I say in the dressing room stays in there.

"I use the word 'embarrassing' because I'm trying to be respectful. This is not an easy (press) conference this one, I need to be very careful what I say. I'm responsible.

"It's going to be a difficult week. The players who are on the pitch next week are going to do something about it.

"I don't think I want to watch that again. Sometimes I make clips. I wouldn't have time to make as many clips as I need. Maybe the players will watch it. Maybe it will be good therapy for them to watch themselves."

Cesc Fabregas scored early in the second half as Chelsea maintained their five-point lead at the top of the table with a 2-1 win away to Crystal Palace.

Oscar's sixth-minute free-kick put the visitors - without the injured Diego Costa - in front before Cesar Azpilicueta was issued a straight red card for a foul on Mile Jedinak five minutes before the break.

Fabregas' first Premier League goal for his new club put Mourinho's men back in front before a late strike from Fraizer Campbell left the visitors hanging on for the final whistle.

Sergio Aguero scored all four in a 4-1 win for Manchester City over Tottenham in the lunchtime kick-off.

Aguero proved City's star in another thriller at the Etihad Stadium, which featured four penalties and the dismissal of Spurs debutant Federico Fazio.

Aguero's 13th-minute opener was immediately cancelled out by Christian Eriksen before Aguero put City back in front from the spot.

Aguero missed his second penalty in the 32nd minute and Roberto Soldado wasted his chance to draw Spurs level again on the hour when his spot-kick was saved by Joe Hart.

Fazio was dismissed for fouling Aguero in the box seven minutes later and the striker got up to send his third penalty of the afternoon past Hugo Lloris. The Argentinian then curled home a superb fourth to end the drama.

Danny Welbeck netted in injury time to salvage a 2-2 draw for Arsenal at home to Hull.

Arsene Wenger breathed a sigh of relief as Welbeck struck in added time to salvage a point against the Tigers.

Alexis Sanchez had given the Gunners a 13th-minute lead but Mohamed Diame hit a controversial equaliser four minutes later despite appearing to foul Mathieu Flamini in the build-up.

Despite losing goalkeeper Steve Harper to an arm injury before the break, Hull went ahead through an Abel Hernandez header and looked set to hang on for a famous win before Welbeck struck.

Ross Barkley made his first Everton start of the season as his side shrugged off their disappointing start to the new season with a dominant 3-0 win over Aston Villa.

By the time Barkley was substituted in the 66th minute his team-mates had done their bit with Phil Jagielka opening the scoring with a 13th-minute header and Romelu Lukaku squeezing a 66th-minute second under Brad Guzan.

Seamus Coleman wrapped up victory 14 minutes from time when he latched onto a cross from the excellent Leighton Baines.

Diafra Sakho maintained his fine scoring form as West Ham won 3-1 at Burnley to rise to the heady heights of fourth place.

The Senegalese star made it five wins in five starts when he headed a 49th-minute opener for his side at Turf Moor.

Enner Valencia added a second for the Hammers five minutes later before Burnley rallied with George Boyd reducing the deficit and Danny Ings coming agonisingly close to an equaliser.

Carlton Cole's header in the 70th minute completed another impressive afternoon for the Hammers and gave Sam Allardyce, who turns 60 on Sunday, another cause for celebration.