Keegan To Spill The Beans? 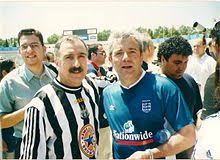 Kevin Keegan has a new autobiography in the pipeline, which must feature Mike Ashley.

Pan Macmillan have acquired the rights to the upcoming title and it is set to be published a month into the next football season, in September 2018.

All eyes will be on what King Kev has to say about Newcastle United and particularly his big ‘mate’ Mike Ashley.

Ashley says he intends to sell the club by Christmas but will Kevin Keegan be able to talk about the impact of new owners when he adds the final touches to his sure to be best seller?