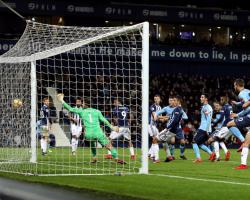 Newcastle had fallen behind after Hal Robson-Kanu and Sam Field put Albion, who have now appointed former Newcastle boss Alan Pardew as their new head coach, in control

But Evans deflected Matt Ritchie's free kick into his own net with seven minutes left to take the Magpies five points clear of the Premier League relegation zone after they ended a four-match losing run.

"It's a big point and it keeps us going," Darlow told nufc.co.uk

"At 2-0 down away from home, the lads showed fight and courage to come back and play such good football, get the point and we could have nicked it right at the end.

It changed the game - after conceding the second, we quietened the crowd straight away

It was an important goal and we went from strength to strength after that.

But, credit to the lads - they battled back and we got the point."

"The manager rotates quite often, so you have to be ready each week and I'm just pleased to be back and playing for Newcastle," he said.

I knew I needed to manage myself through my first game back after not playing for a while, but I felt good

I felt like I did alright, so we'll see what kind of team he picks on Saturday (at Chelsea)."