Jenas Hits Out At Toon Fans!

Jermaine Jenas has told GQ Magazine that Newcastle United fans’ demands for attacking football at St. James’ Park could cause disaster this season. 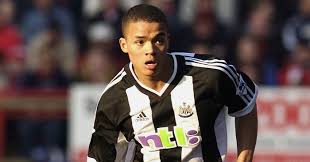 Newcastle earned promotion back to the Premier League as champions last season, but Jenas is concerned that Rafael Benitez’s side are set for a struggle upon their return to the top flight.

Jenas feels that Newcastle will go down, and the demands of the supporters could be part of the reason for that.

Newcastle United manager Rafa Benitez celebrates after winning the Sky Bet Championship Title after the match between Newcastle United and Barnsley at St James' Park on May 7, 2017 in...

He said: “I think Huddersfield could be this season’s Bournemouth and surprise a lot of people. It will be hard for them, no question, but I think it will be harder for Brighton and Newcastle.

“I know from experience that Newcastle is a club that expects so much. When Newcastle play at home, as a newly promoted team they will need to dig in, play the percentages and grind out results, but the fans won’t want that. They will demand more from the team… they want goals and they want to win games 5-4, or 4-3 and right now, with the players they have got, they aren’t good enough to do that.

“You might find that Rafa Benitez gets his best results for the team away from home because there won’t be the same pressure. Benitez is at his best when he is able to be pragmatic, set up a team to nullify the opposition and get results against the odds. He won’t be able to do that at home.

“If the Newcastle fans can accept that, if they can support the team when they don’t have possession and be satisfied with nicking results, then it might be a different story. But if they start getting frustrated that the team aren’t playing attacking, free-flowing football and they put more pressure on the team it could be disastrous.”

Benitez has expressed frustrations at Newcastle’s lack of transfer business this summer, and there are fears that the Magpies could be short of quality.

Newcastle have made five new additions so far, but Benitez was hoping for more.

The Magpies are expected to do more business before the end of the month, but there are fears that it may be too little too late.

Newcastle kick their season off with a match against Tottenham Hotspur at St. James’ Park.