Is Rondon The Key To Rafa Staying?

Jamie Carragher was thrilled by what he saw from Newcastle striker Salomon Rondon in Liverpool’s 3-2 win at St James’ Park. 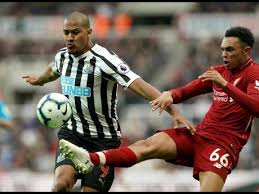 Rondon scored the second Newcastle goal and was a constant thorn in Liverpool’s side, but in the end his performance was in vain.

Divock Origi scored a late winner after a controversial free-kick, with Fabinho looking like he went down without any contact.

Talking on the live Sky Sports commentary of the game (Saturday, 7pm), Carragher was quick to praise Rondon for what he saw.

“He’s been excellent all night, Rondon. I’ve said all night he could be the man to cause Liverpool problems. He’s been right on it all night.

“What a finish on that left foot from Rondon. A massive goal in the title race.”

Rondon has been showing why Rafa Benitez was so keen on landing him this season.

The 29-year-old has scored 10 goals now and added seven assists in just 30 Premier League games, but it’s his overall game that works so well for Newcastle.

Newcastle fans would love to see him make a permanent move in the summer but there’s been talk that Mike Ashley doesn’t want to spend £17million on a player that that has no re-sale value.

Benitez has to make a decision on a new contract this summer and  Rondon maybe a key condition to getting his signature.