Is He Really Happy To Stay?

Newcastle United manager Rafa Benitez has given the club a huge boost by revealing that he is ready to discuss a new agreement with the club, according to a report. 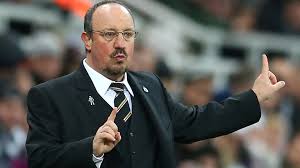 The Sunderland Echo has stated that the Magpies boss, who was thought to be on his way out of St James’ Park, is now happy to engage in contract talks once the transfer window closes.

Benitez has been openly frustrated with the club’s lack of transfer activity in light of takeover talks which have meant that the Spaniard has been kept in the dark with regards to funds available to spend in the January window.

With those now seemingly dissipated and Mike Ashley brandishing Amanda Staveley’s PCP Capital Partners group potential purchase of St James’ Park ‘a complete waste of time,’ it has meant that the former Liverpool boss can now continue to focus on footballing matters.

“I told Mike what I thought about that (the contract extension),” said Benitez in the Sunderland Echo.

“He knows my opinion, and we don’t have to talk now. I don’t have any problem with my future.

“I’m really pleased to be here and I love the city, the fans, the potential, everything.”

But Benitez did stop short of giving an all-out commitment to the club as he issued a warning that his future on Tyneside hinged on the club’s financial situation, as he added: “I can give my opinion in terms of football operations. But everything is subject to the financial position of the club.”

The Spanish manager is a huge favourite of Magpies fans who see the 57-year-old as one of their own and this statement will undoubtedly be a boost given their lowly league position.