Is He Good Enough For This Club?

Gary Neville has said that “panicking” Newcastle centre-back Jamaal Lascelles cost his side two goals in the 3-2 defeat against Liverpool on Saturday night. 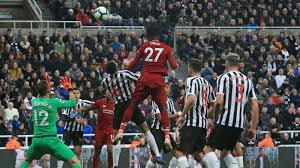 Rafa Benitez’s side put in a brilliant performance across the pitch and almost did enough to cost Liverpool the title, but a late goal from Divock Origi broke the hearts at St James’ Park.

And, talking after the game on Sky Sports (Saturday, 7pm), Neville was full of praise for Salomon Rondon, but singled out Lascelles for blame.

“The centre-halves of Newcastle have gone missing for both goals. Lascelles was panicking and then he lost his footing [for the first goal].

“Virgil van Dijk can’t believe how much space he’s got.

"He was no better for the third goal."

I think it goes without saying Lascelles would struggle to get into the team of any of the top six clubs. Is he good enough for Newcastle?

He doesn't have the strength or height of the major players in the league, but he has fight and passion.