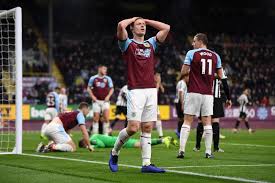 Former Newcastle striker Sam Vokes scored against us on Monday night and many said the 'keeper was "too far off his line."

But it breaks a threeand a half year record.

It was scored from 17.65 yards out, the furthest distance for a headed Premier League goal since Jamie Vardy for Leicester against Sunderland in August 2015.