Info For Away Fans - Goodison

Newcastle are away at Everton on Wednesday (19:45 GMT).

Follow the M62 until you reach the end of the motorway (beware of a 50mph speed camera about a 1/4 of a mile from the end of the motorway). Then keep right and take the A5058 Ring Road North, signposted Football Stadia. After three miles turn left at the traffic lights into Utting Avenue (there is a McDonalds on the corner of this junction). Proceed for one mile and then turn right at the corner of Stanley Park into Priory Road. Goodison is at the end of this road.

There is a car park in nearby Stanley Park which costs £10. The entrance to the car park is in Priory Road. Randy Coldham adds; 'If you approach from the M57 (to join the M57, leave the M62 at Junction 6), and then leave the M57 at Junction 4. Take the A580 towards Liverpool, and on the right, you will reach the Walton Lifestyles Sports Centre (L4 9XP) where you can park for £7. It is then a 15 minute walk to Goodison with a very good Chinese Chippy on the way. By parking there you are well away from the traffics jams that you tend to get at Stanley Park after the match and only a five minute drive from the motorway system. Otherwise it is a case of finding some street parking, however, please take note that there is a Residents Only Parking Scheme in operation around the nearby area, so pay attention to those signposts. There is also the option of renting a private driveway near Goodison Park via YourParkingSpace.co.uk. 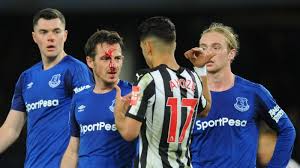 Kirkdale Railway Station is the closest to the ground (just under a mile away). However, it may be more advisable to go to Sandhills Railway Station as this has the benefit of a bus service to the ground, which runs for a couple of hours before the game and around 50 minutes after the final whistle. The bus drops you off within easy walking distance of Goodison Park.

Gary Beaumont adds; 'The best route for away fans from the city centre if they want to use public transport is definitely the Merseyrail Northern Line to Sandhills where they alight and catch the special Soccerbuses; trains can be caught from Liverpool Central. If fans are buying their train tickets in Liverpool, ask for a return to Goodison Park as opposed to Sandhills even though that's where you're getting off. The advantage of doing this is that the train ticket is valid also for the Soccerbus and the additional fare is only £1 return as opposed to £2 that you'd have to pay on the bus if you only bought your ticket to Sandhills. Both Sandhills & Kirkdale stations and can be reached by first getting a train from Liverpool Lime Street to Liverpool Central and then changing there for Kirkdale. Patrick Burke adds; 'Although I would recommend using the Soccerbus to get to the ground, afterwards you may wish to look at alternatives, such as grabbing a taxi into Liverpool, or walking to Kirkdale railway station. This is because the Soccerbus is normally very cramped after the game, plus you may have to wait sometime to get on a bus (up to half an hour if there is a big queue) and it can then take 20 minutes or so for the bus to make its way from the ground'.

On exiting from Kirkdale Station turn right and then cross the railway bridge. At the traffic lights go straight on up Westminster Road, for about 400yds and then you'll see the Elm Tree pub. Turn left at the pub into Barlow Lane. You will reach the main County Road (A59). Cross over County Road at the traffic lights and then proceed down Spellow Lane you will reach Goodison Park on the left. On the whole it is a fairly straightforward walk and there are plenty of other fans to follow if you are unsure of the way.

From Liverpool Lime Street By Bus Or Taxi

The main railway station in Liverpool is Lime Street which is over three miles from the ground and is really too far to walk (although it is mostly downhill on the way back to the station), so either head for Kirkdale station or jump in a taxi (about £8). Iain Badger 'The easiest way to get to the ground from the city centre is to use the 919 Special buses from Stand 10 in St John’s Lane. This is just across the road from Lime Street station and down the left hand side of St George’s Hall if you stand outside the rail station looking directly at the hall building. The buses start running two hours prior to kick off and drop you by the club shop at the ground. The buses run from the other side of the street for the return journey. A single fare is £2.20. The 919 takes only 10 minutes to get to the ground and doesn’t stop on the route.'

Behind the Park Stand is a small outdoor fan zone which serves alcohol, as well as food. Currently visiting supporters are allowed free entry into the fanzone. About a 15 minute walk away from the visiting supporters entrance, is the Thomas Frost pub on Walton Road. This Wetherspoon outlet is a fair sized pub, that had a good mixture of home and away supporters when I last visited. Rob Elmour adds; 'We found the Thomas Frost on Walton Road packed out, so we tried the Bradleys Wine Bar, which is just further down and across the road. It was very good. not a wine bar at all but a proper family run local with a good selection of beers including some real ales. Good mix of fans all very friendly.' More information can be found on the Bradleys Wine Bar website. Peter Bennett suggests The Spellow just outside Goodison Park, whilst John Ellis a visiting fan informs me; 'Along Walton Lane, on the corner of Cherry Lane is the Liverpool Taxi Cab Drivers, Sports and Social Club. On our visit, there was a good mix of home and away supporters. The Club charges a £1 entry fee.'

Otherwise you can walk along Priory Road (where the away coaches drop off and park) or across Stanley Park, going away from Goodison over towards Anfield. The Arkles pub, the usual haunt of away fans visiting Anfield is also popular with away fans going to Goodison. It is about a 10-15 minute walk. At the end of Priory Road, turn right into Arkles Lane and the pub is up on the left. It also shows Sky Sports.

Tom Hughes adds 'The city centre is usually the best bet for a pre-match drink, There are hundreds of pubs available ranging from designer types to real-ale and saw dust bars. Near Lime Street Station there is the big house (the Vines) next to the Adelphi which is worth a visit. Nearer Goodison 'The Hermitage' (a friendly pub, 5/10 minutes walk up Walton Lane and under the bridge) on Queens Drive is also okay.'

There is a Wetherspoons across the road from Lime Street Station, plus at the station itself, is the Head of Steam, which is listed in the CAMRA Good Beer Guide and also has a large screen showing sporting events. Also, the nearby Crown pub also recommended to me. Alcohol is served in the away section of the ground, including beer from the Club's sponsors Chang. Please note though that the club stop serving alcohol 15 minutes before the first half kick off and the queues at half time can get pretty horrendous.

Visiting Supporters Only Sign Away fans are located in one corner of the two-tiered, Bullens Road Stand, which is at the side of the pitch, where just over 3,000 away fans can be accommodated. If a small following is expected, then only the lower tier is allocated, which holds 1,700. For larger followings then the upper tier is also made available. If you can, try to avoid getting get tickets for the rear sections of both the upper and lower tiers, as the view can be quite poor. For example, in the rear of the lower tier, there are a number of supporting pillars that can hinder your view, the seating is of the old wooden type and the gap between rows is tight. The front of the lower tier is a lot better having newer seats and no supporting pillars to contend with. The rear of the upper tier also has problems as Neil Theasby a visiting Hull City supporter informs me; 'Our seats were on the very back Row S and the view was awful! There were two obscuring pillars but worse than that the angle of the roof meant that you couldn't see the video screen and the view of the opposite touchline was also partly obscured'. The facilities within the stand are basic and it is really showing its age (it was first opened in 1926). However, away fans can generate some noise from this area, making for a great atmosphere. The catering from the small concourse area includes amongst other things; a Scouse Pie, which apparently is a kind of meat stew in pastry (£3.30).

I have enjoyed a number of good days out at Goodison. The atmosphere was relaxed and friendly, with both sets of fans mixing freely before the game. In keeping with tradition they still have someone walking around the pitch before the game, throwing toffees into the crowd, which is a nice touch. If you arrive at the ground early then there is a small fan zone located in the car park behind the Park Stand. The fan zone has entertainment as well as eating and drinking outlets and away fans are able to gain entry. Neil Thompson a visiting Preston supporter adds; 'The stewards inside the ground were superb and the best I have seen at any ground. They just ran things with a sensible head and communicated with people, first class. There are a lot of grounds that can learn from the Everton stewarding'. The Club have automatic turnstiles, meaning that you have to insert your ticket into a bar code reader to gain admittance.

On a poignant note, if you do happen to notice some flowers lying around the perimeter of the pitch, this is because the ashes of a number of supporters (over 800) have been interred around it.