Info For Away Fans

Follow the A338 towards Bournemouth. The ground is situated on the left of the A338 in the outskirts of town. You should be able to spot the tops of the ground floodlights on the left. Otherwise leave the A338 via the slip road which is signposted Kings Park/Football traffic. You will then reach a small roundabout at which you take the second exit into Kings Park Drive. The entrance to the stadium and car park are down this road on the left. The car park at the ground is of a good size, however please note that this is a pay and display car park that costs £3.50 for 4 hours or £5 all day. As you would expect that though it fills up pretty quickly So if you don't get to the car park until at least 90 minutes before kick off you may end up disappointed. A ten minute walk across the park is Harewood College on Harewood Avenue, which offers free matchday parking. Some fans are also parking in Boscombe itself and walking to the ground. There is the Sovereign Shopping Centre on Christchurch Road which costs £2 for 4 hours.

The nearest train station is Pokesdown which is roughly a mile from the ground and is around a 15 minute walk away. However, most trains arrive at Bournemouth Central, which is around a half an hour walk to the ground. Either try to get a train to Pokesdown or grab a cab (£7-£8). If you do arrive at Pokesdown Station (which is served by trains from London Waterloo), then exit the station (there is only one exit) and turn right down the main Christchurch Road (A35). Proceed for about 400 metres and then turn right into Gloucester Road. Dean Court is located down the bottom of this road. Thanks to Andy Young for providing the directions from Pokesdown Station.

If you arrive at Bournemouth Central, then leave the station by the South exit, thereby facing an Asda Supermarket. Turn left and walk down to the main Holdenhurst Road. Turn left (going away from the town centre) and then keep straight on along Holdenhurst Road for around 25 minutes, reaching the Queens Park pub (recommended by this Guide). Continue straight on past the pub until you reach a roundabout at which you turn right into Kings Park Drive. The ground is down the bottom of this road on the left. Alternatively you can catch a Yellow Number 33 bus to the ground, normally a half hourly service. Come out of Station again by the South exit, facing Asda and turn left until you get to a Texaco Garage. There is a bus stop with shelter on the same side of the road. Ask the driver to be let off near Kings Park Drive. Please note that if you decide to use the same service coming back, take a yellow number 2 bus as this is a circular service'. Latest bus timetables can be accessed by visiting the Yellow Buses website. Thanks to Richard Barnes for supplying the directions from Bournemouth Central.

There is the 1910 Supporters Bar at the ground, but this is for home fans only. Similarly, the closest pub to the stadium, the Queens Park Hotel on Holdenhurst Road (alongside the A338 Wessex Way) also does not allow in away supporters.

Around a 10-15 minute walk away in nearby Boscombe is the Mello Mello Bar on Christchurch Road. Away fans are welcome at this pub as well as Baxters which is a little further down on the opposite side of the road. The Mello Mello Bar also has the added benefit of showing televised sport on a number of screens. Otherwise it may be the case of drinking in Bournemouth Town Centre before the game, although it is around three miles away from the Vitality Stadium.

Alcohol is made available to visiting supporters inside the stadium, in the form of cans of John Smith’s Bitter or Fosters Lager (£3.50). 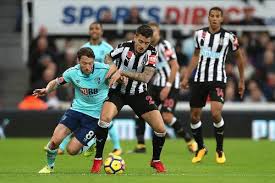 Away fans are located on one side of the Energy Consulting East Stand, which is situated at one side of the pitch. The normal allocation for this area is 1,500 seats, but this can be increased to 2,000 if required. The stand is shared with home supporters and offers a good view of the playing action. The facilities are okay and normally there is a good atmosphere. Please bear in mind though that if you have tickets for the lower rows in this stand, then at the beginning and towards the end of each season, the sun can shine quite brightly into this area, so make sure you bring your shades and a cap! For the bigger FA Cup games then visiting supporters are housed in the Ted MacDougall Stand at one end of the ground, which has a capacity of 2,150. I had a fairly relaxing visit to the stadium with no problems experienced.

Food on offer inside the ground includes a range of Pies; Steak and Ale, Chicken & Mushroom Chicken Balti (all £3.50), Burger/Cheeseburgers (£4), and Hot Dogs (£4). Ian Holt a visiting Reading fan adds; 'Compared to other grounds there is little in the way of burger vans outside the ground or in the vicinity of the stadium. Although inside the menu looked quite good only Steak & Ale Pies, Sausage Rolls or Hot Dogs were available when we visited'.

For night games in the build up to kick off, the stadium puts on a short lights show. Which although entertaining, doesn't really resemble a stadium light show as such, but more of a very large disco!