Henri Saivet determined to prove he has future at Newcastle 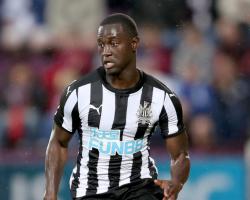 The Magpies plunged out of the Carabao Cup at the hands of Sky Bet Championship Nottingham Forest on Wednesday evening to extend their miserable start to the new season.

Benitez made 10 changes to his starting line-up, which meant a series of men - who have been told they can leave the club and others for whom they are open to offers - were drafted in.

Senegal international Saivet, who had previously made just four competitive appearances for the club he joined form Bordeaux in January 2016, was one of those given a rare chance and was one of his side's better performers.

Asked about his future, the 26-year-old told NUFC TV: "I am going to fight for the team, for the fans, for everybody.

"I want to play, but it depends on me

I have to work hard to show to the manager and to everybody that I can play."

The Magpies' 3-2 extra-time defeat did little to improve the mood at St James' Park following back-to-back Premier League defeats by Tottenham and Huddersfield, and with the club's summer transfer dealings still exercising Benitez, Saturday's clash with West Ham is assuming ever greater proportions.

It was a chance for us to show how we have progressed.

"We have to keep going

The main thing for the moment is to work because we have now lost three games.

"It was a bad result for us, so we have to think about the future game against West Ham and try to work hard."