Gullit left his job soon after and Shearer was re-instated to the team by Bobby Robson.

Shearer and Gullit worked together during the World Cup this summer but were handed top billing during the first MOTD of the season.

If they were to square up ... who would win?

Gullitt towers over Shearer, and I tell you what, I know who my money would be on. 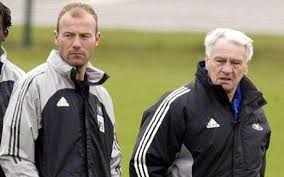 Alan Shearer: “Viewers are asking what the atmosphere is like with Ruud Gullit and I in the Match of the Day studio.

“When Gullit was Newcastle boss he dropped me to face Sunderland in 1999.

“We lost and he left the next day.

“It was frosty for years and when we were first on TV together it was uneasy.

“But we have worked on different shows for a while now and played golf together.

“He accepts he could have handled things differently and from my view it has long since been time to move on.

“Life is too short.”