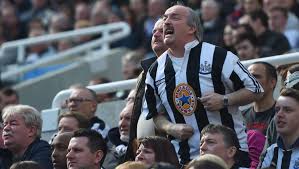 The West London club have now decided to take back tickets from Newcastle United fans who had bought them in good faith for the final Premier League match of the season.

Fulham issuing refunds but countless Newcastle fans will have made travel and accommodation bookings once they’d purchased tickets.

Craven Cottage is the only Premiership club that has ‘neutral’ sections, right next to the official away allocation.

In the promotion season of 2016/17, the opening Friday night of the season saw a sellout, largely down to the sheers number of Newcastle fans at the game, an estimated 7,000 or so supporting NUFC.

They changed it so that only Fulham fans with a previous purchase history could buy tickets in the ‘neutral’ sections.

The idea being that they wanted as many of their own supporters inside Craven Cottage if they still had a chance of staying up.

However, once relegation was confirmed at the start of April, Fulham instantly scrapped that idea.

They reverted back to their usual policy of selling tickets to the general public for the ‘neutral’ sections.

Despite tickets being twice as expensive (£60) as the official away section (Premier League rules are that you can’t charge more than £30 for away tickets), Newcastle fans instantly started buying up tickets in the ‘neutral’ areas.

However, after three weeks of happily selling tickets to Newcastle fans and letting them book and pay for travel and accommodation, Fulham have suddenly came out with the following….

‘Join us at Craven Cottage for the final home game of the season as the Whites take on Newcastle United on Sunday 12th May, 3pm kick-off.
Owing to restrictions imposed on the Club by the SAFETY ADVISORY GROUP, we are unable to sell tickets to away (Newcastle United) supporters.

This means that supporters who live in an NE, TD or or DH postcode will be unable to purchase.

Any electronic tickets currently purchased from fans living in these areas will be automatically cancelled and reimbursed*.

*Anyone identified as an away supporter in areas of the ground other than the designated away section will be ejected.’