Away supporters are housed in the North East corner of the stadium, where just over 3,000 fans can be accommodated. The view of the playing action is good (although you are set well back from the pitch) as well as the facilities available. The concourse is comfortable and there is your normal range of hot dogs, burgers and pies available. There are television screens on the concourse showing the game going on within the stadium. My only slight grumble was that the gents toilets are poorly designed. They have a narrow 'zig zag corridor' of an entrance which hindered people coming in or out and didn't help the major traffic flow at half time! On the positive side though, the atmosphere within the stadium was good, with the home fans singing on both sides of the away section. The atmosphere is further boosted by a huge bare chested drummer, who is located at the back of the home section, immediately to the left of the away fans. The stewarding was also pretty relaxed. The teams come out to the Post Horn Gallop tune, reminiscent of fox hunting! (Leicester are nicknamed the Foxes).

Paul Groombridge a visiting Gillingham fan adds; 'From the far upper seats of the away section, the view was pretty good, though from there, you'd probably complain of being too far away from the action (I thought it was okay). One good thing about being at the top of the away section - you can use the plastic transparent panels as pretty good drums when singing!'. Food on offer inside includes; Burgers (£4), Hot Dogs (£3.80), Pukka Pies (£3.30), plus Baguettes and Wraps (£3.20).

I have received a number of reports of away fans being treated somewhat heavily handed by the local constabulary around the stadium and of some even being 'frog marched' from the railway station to the ground. Although these measures may be deemed necessary, in order to prevent violent disorder, is doesn't do much for the overall away day experience at Leicester. Stuart Bible informs me; 'Just to confirm that the Police presence at Leicester Station is completely over the top. As a visiting QPR fan recently we were 'guided' to the Hind Pub & promptly asked to drink up at 2pm. All 25 of us were then escorted by 38 Police (I counted them) a Dog & 3 Police vans. Of the 25 were 3 children under 10! They should save their heavy handedness for the day that there might be a real threat of trouble'.

The ground is walkable from the city centre (15-20 minutes), where there are plenty of pubs to be found. Most of the pubs near to the stadium are home fans only. In particular 'The F Bar' should be avoided by visiting supporters, plus the 'Symphony Rooms' located just over the road from the away end. On a brighter note there is the Soaring Eagle Spur Steak and Grill, which has a bar which admits away fans. It also has the added advantage of having BT Sport available. It is located next to the Holiday Inn Express just across the road from the Club Superstore.

Andy Jobson a visiting Southampton fan informs me; 'Probably the best bet for away fans is the Counting House pub on Freemens Common Road. It has a good mix of both sets of supporters, with all the normal facilities on offer'. Beaumont Fox adds; 'This pub is located just off the Aylestone Road, behind the Local Hero pub (home fans only) and next to Morrisons Supermarket. It does though exclude away supporters when the game is deemed to be a 'high profile' one'. David Moore adds; 'If away fans fancy a quiet drink in a CAMRA Good Beer Guide listed pub then the Swan & Rushes (on Infirmary Square, near the Royal Infirmary) always has excellent guest ales on'. Also is the same area as the Swan & Rushes (about a 15 minute walk away from the King Power Stadium), is the Kings Head on King Street, which is another CAMRA Good Beer Guide listed pub.
For those arriving by train, then as you come out of the main entrance turn left and cross to the other side and there you will find 'The Hind' which is rather a basic pub, but does have real ales. A better bet may be the Wetherspoons pub called the 'Last Plantagenet'. If you turn right out of the station and cross the road and turn left into Granby Street, then this pub is down on the left. Also not far away from the station in the general direction the ground, is 'The Pub' which located on New Walk. This modern bar boasts 15 hand pumps for real ale (many of which are supplied by local microbreweries), plus continental biers and lagers as well as cider too. The pub also serves food.

Otherwise alcohol is available inside the stadium, however this can be a bit of a 'hit and miss affair' depending on which team you support. Richard Aquilina a visiting Bristol Rovers fan explains; 'Certainly alcohol wasn't available in the away end on our visit. The pumps were covered with black bags and the signs were covered with cardboard!  When I enquired further it appears that alcohol is not sold for high profile games. By high profile I think they mean more than a few hundred fans as there obviously isn't any history between Leicester and Rovers as this is the first time we met at this level'. If you are lucky enough that alcohol is available then it is in the form of; Lager, Bitter, Cider (all £3.70). Plus bottles of Singha (£3).

How To Get By Car & Where To Park

Leave the M1 at Junction 21, or if coming from the Midlands, follow the M69 until the end of the motorway (which meets the M1 at Junction 21). Take the A5460 towards Leicester city centre. Continue on this road, until you go under a railway bridge. Carry on for another 200 yards and turn right at the traffic lights into Upperton Road (sign posted Royal Infirmary) and then right again into Filbert Street for the stadium.
Allow yourself a little extra time to get to the ground as traffic does tend to get quite congested near the stadium.

Recently a number of 'Residents Only Parking' schemes have been implemented on streets off the A5460 Narborough Road and Upperton Road, near to the ground, which means that street parking now has to be found further away from the stadium. You can park on side streets off Narborough Road but located  further back in the direction of the outskirts of Leicester that you will have travelled through, (if approaching from J21 of the M1) but this may then mean a 20+ minute walk to the King Power Stadium.

Alternatively you can park at Leicester Rugby Club (£3) which is a ten minute walk away from the stadium. Dan Willatt a visiting Nottingham Forest fan advises; 'The Police close a number of roads around the stadium for up to 40 minutes after the final whistle to allow fans to disperse. We parked at a car park located in Filbert Street, but in the end in took us well over an hour in queueing traffic to get away from the ground. It may be best to consider parking further away from the stadium if you want a quick exit.' This official car park in Filbert Street has to be pre-booked with the Club and costs £15 per car. 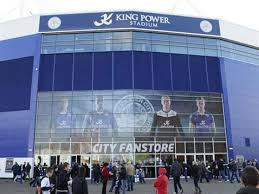 The train station in the city centre, is situated around 1.5 miles away and is walkable from the ground. This should take you around 25-30 minutes. Please note that there is normally a heavy Police presence around the station.

A walking route to the stadium is signposted from across the road from the station. Come out of the station entrance and cross the road in front of you. Turn left and then go right along a pathway that runs beside and looks down on the Waterloo Way ring road. Continue straight along this pathway for around half a mile and you will reach a small park on your right (Nelson Mandela Park). You will clearly see behind it 'Welford Road' the impressive looking home of Leicester Tigers Rugby Club and diagonally beyond the ground you should be able to make out the steelwork above the top of the stands of the King Power Stadium. Either walk around the park on your right or walk through it and on reaching the main road on the other side, cross over at the pedestrian crossing and with the rugby ground immediately in front of you turn left. Walk past the rugby ground on your right and continue straight along this road, then taking a right turn into Almond Road. Pass the Counting House pub on your left and at the T-junction turn left into Aylestone Road. Take the next right into Raw Dykes Road and you will reach the stadium and away supporters entrances in front of you.