Things look pretty grim for Newcastle after Sunday's heavy defeat by Leicester but I don't think they need to press the panic button yet. 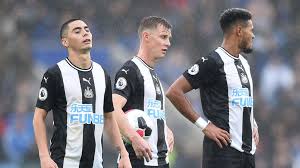 Yes, the second half at the King Power Stadium turned into a total nightmare for the Magpies but you have to remember they were down to 10 men and were playing an in-form Foxes side, who went after them relentlessly.

I actually thought the Magpies were decent defensively and held a good line until Isaac Hayden was sent off, and it was only after the break when their heads dropped and things got messy.

Leicester scored some of their goals far too easily but I don't think that was down to a lack of effort, despite what Newcastle captain Jamaal Lascelles said about that after the game.

They were actually trying to get out to the ball but Leicester had too much quality in possession. Before Newcastle knew it, they were kind of burnt out, and that is when the game really got away from them.

It is embarrassing when you end up on the wrong end of a scoreline like that so I know where Lascelles is coming from but it is important that they do not dwell too much on one result, no matter how bad it was.

I have played under Bruce and I know he won't let that happen. According to Lascelles he dished out a rollicking after the game but I've been in a dressing room when that has happened and he never makes it personal.

He will have been talking about what the team needs to do better as a whole. That is what his focus will be on now, and it is only September, so he has got time to put it right.