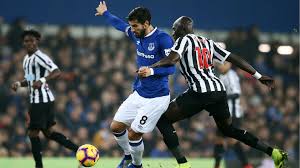 Newcastle manager Rafael Benitez said: "I think the work we produced against a very good team was fantastic.

"We suffered after taking the lead but we were better in the second half and both teams had chances to score. The main thing was to defend well and create chances, but we would like to be more accurate in our counter-attacks.

"We have to be realistic, they are a good team and they had chances in the first half, and they have four games unbeaten at home, so we have to credit our players."