Fans Make It Loud And Clear

Rafael Benitez spent the entire night taking the acclaim of the Toon Army, from before kick-off to a post-match lap of honour when the supporters chanted long and loud for the Spaniard to agree a new deal to stay at St James' Park. 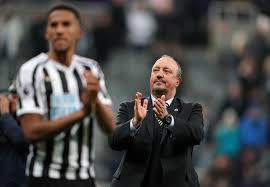 The messages are still mixed coming from Ashley and his board, but there is only one outcome these fans, who idolise Benitez, want.

Whether Benitez gives them what they desire remains to be seen but once again he has kept a workmanlike squad in the Premier League with room to spare and now wants the investment to send them into the top 10.

Ironically, on this night, some of the Benitez trademarks were missing as wretched defensive organisation allowed Liverpool to cash in on each of their goals.

But, as he led the players around St James' Park to take the supporters' applause it was clear that those fans now want the final line of this season's story to be written with Benitez's name on a new deal.

When asked about his future, Benitez said: "We have been talking the last week and hopefully in one or two weeks will have more news."

The signing of Salomon Rondon could be key to Rafa signing a new deal. The striker has hit double figures for goals in a Premier League season for the first time.

Only Chelsea's Eden Hazard (48%) has had a hand in a higher proportion of his team's goals in the Premier League this season than Rondon (45% - scoring 10 goals and assisting 7 of 38).