The Italian was appointed in March 2013 with the remit to steer Sunderland away from relegation, and he led the club to  a 17th-place finish.

This season was more difficult, and Di Canio was sacked in September with Sunderland bottom of the Premier League table, but he insists that he proved his worth as a coach the previous season. 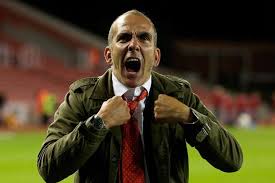 Paolo Di Canio: “I am ready to return.

“Five games cannot cancel what I did in the seven games before then, when I saved the club.

“Football is my breath. The Premier League is my aim, of course. Every manager thinks they are ready for the top, top level but I do not only think about the top.

“The top for me is the place where I can train and work in my way.

“If you read what those players said when I took charge last year, they praised me.

“In some way, they blamed the previous manager but there was no chaos about that at the time.

“It is not an issue for me. I was sacked like 100 managers in life – but when it happened to me, there is always said to be a problem, but there was not a problem.”