And if THAT doesn't put him off ... NOTHING will! 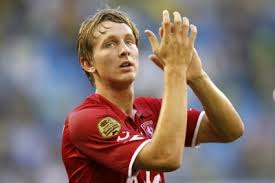 But let's not get too excited about the Dutch international, because he hasn't played since APRIL 2013!

And he was 5th striker in the pecking order at the German club!

However, De Jong jetted into Newcastle Airport yesterday afternoon and is now set for a debut in Saturday's derby with Sunderland after Loic Remy's sending off at Carrow Road on Tuesday night.

United are likely to leave a move for Remy Cabella until the summer after resistance from Montpellier.

Alan Pardew: "We wish Yohan all the very, very best.

"He wanted to move, he has a dream move and we need to use that money wisely like we did with Andy Carroll.

"We had one or two targets we're now chasing down. We're hoping (Luuk de Jong) will have a medical and he will come on loan.

"He's a player we really liked when he was in Holland.

"He went to Germany and it didn't quite happen for him, so this is a second opportunity and we hope he takes it with us."