Cisse To Replace Bony At Swansea? 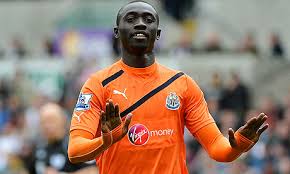 The 29-year-old, who is currently on Africa Cup of Nations duty with Senegal, has a year-and-a-half remaining on his current deal at St James' Park.

Cisse has scored nine goals in 13 appearances for the Magpies this term, although his time on Tyneside could be drawing to a close.

"I have one and a half years left on my contract," he is quoted as saying by The Mirror. "Today I focus on the African Cup of Nations.

"Then we will see how things will evolve and my future with Newcastle. We talk about a lot of clubs, Swansea and others."

Swansea look likely to be in the market for a new striker with Wilfried Bony closing in on a move to Premier League champions Manchester City.