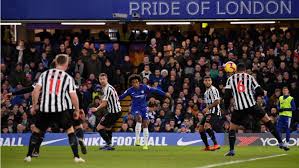 Newcastle United have slipped back into the relegation zone after the Magpies suffered a 2-1 defeat to Chelsea at Stamford Bridge.

Pedro gave the Blues an early lead before Ciaran Clark netted his third goal of the season to pull the Magpies level.

But, despite Newcastle’s spirited fightback, the Blues’ class eventually told and Willian curled in a brilliant second-half winner for Maurizio Sarri’s side to condemn Rafa Benitez’s men to another defeat.

With results elsewhere going against Newcastle, the Magpies dropped from 15th down to 18th, and will spend the next week in the bottom three.

With Ki Sung-yueng away at the Asian Cup, Jonjo Shelvey struggling with a recurring thigh problem and Mo Diame absent with a hip complaint, Benitez was forced to hand Academy graduate Sean Longstaff his full Premier League debut.

The 21-year-old was partnered in midfield by Isaac Hayden, too, who is desperate to leave the club this month, but has been blocked from doing so by Benitez due to the lack of alternatives the Spaniard currently has to select from.

So the midfield had it's work cut out.

Paul Dummett was also ruled out due to a hamstring problem, meaning Matt Ritchie continued at left-wing-back - but it was the bench which was most alarming to read.

Among Newcastle’s substitutes was a goalkeeper, four defenders, a winger in Jacob Murphy who Benitez appears not to trust, and a striker in Joselu who has seriously struggled to score goals in the Premier League.

Few gave the Magpies hope once the teamsheet was released - and it certainly highlighted the lack of resources Benitez is currently attempting to work with.

However, Newcastle’s makeshift midfield performed admirably, with Longstaff and Hayden harrying the likes of Jorginho and N’Golo Kante forcing the home side to make mistakes.

Longstaff in particular belied his inexperience to put in a composed display on his full top-flight bow, with the midfielder unafraid to receive possession, even when surrounded by opponents.

The problem is that Newcastle’s engine room lack dynamism and invention. That is not a critcism of Hayden nor Longstaff - it is just the reality of the situation.

With a little more creativity, Newcastle may have found a way to claim a positive result, but it just proved beyond them.

During the first half of the season, the Magpies sorely missed Florian Lejeune - who was sidelined with a knee injury.

But the 27-year-old returned in the FA Cup against Blackburn Rovers, and he was excellent considering that was his first appearance of the campaign.

And, a full eight months after his most recent Premier League appearance against Chelsea on the final day of last season, Lejeune was back in the United XI at Stamford Bridge.

Make no mistake, the Frenchman’s return to the fold is one of the few positives to have emerged during a miserable last six weeks.

His composure in possession, the aerial threat he offers in both boxes, as well as his ability to start attacks from central-defence, will make United a better team.

But, despite the importance of Lejeune’s return, it is Clark who will capture the headlines after his excellent first-half header dragged United back level at Stamford Bridge.

Although Chelsea did manage to get in behind Newcastle’s central-defensive three on occasion - captain Jamaal Lascelles completed the trio - the Magpies defence responded well to their failure to deal with David Luiz’s long, floated ball which allowed Pedro to put the home side ahead.

While the results have hardly been positive since Benitez shifted to a five-man defence, it does appear to be a formation that, now Lejeune is back, could suit this Newcastle side - particularly away from home.

Newcastle’s second-top scorer is a centre-back - and that says it all.

In 22 Premier League games this season, Newcastle have only managed to find the back of the net on 16 occasions.

Over their past nine Premier League matches, the Magpies have only scored five times - and it is therefore little wonder they are in serious relegation trouble.

When you look at their list of top scorers this season, Salomon Rondon has five - and now Clark, a centre-back who is hardly renowned for his goal-scoring prowess, is second with three Premier League strikes from 11 appearances.

Ayoze Perez and Joselu are the only other Newcastle players who have netted more than once this term, and only seven players in total have scored in the Premier League for United.

Aside from Clark’s bullet header, the Magpies’ best opportunities came via Perez, who lashed an effort wide of the right-hand post when he was played through on goal, and Rondon - who uncharacteristically headed wide late on.

This lack of a clinical touch in the final third is nothing new, but it also something which has simply not been addressed over the past few years.

There are around two-and-a-half weeks left in the market for United to make sure they address this situation - but few on Tyneside genuinely have faith that they will unfortunately.

For the first time since the 2-1 home victory over AFC Bournemouth on November 10, Mike Ashley was in attendance to see the Magpies in action.

The billionaire had only returned from his annual festive holiday the previous weekend, but the Sports Direct magnate finally decided to re-connect with the club he is so desperate to sell.

Why exactly Ashley had embarked upon a two-month hiatus from watching the Magpies live is unclear, but he picked a short trip from his Buckinghamshire home for this game - just as he had done back in September when he took in his first United game in 16 months against Crystal Palace.

Back then, managing director Lee Charnley was adamant that re-engaging the club’s owner was in everyone’s interests - but little of what has transpired in the past four months has suggested that was an accurate assessment.

What the billionaire witnessed was the actuality of this Newcastle squad; an honest, hard-working bunch of players who need quality reinforcements in order to help them turn encouraging performances into positive results.

The Magpies showed endeavour and tactical discipline in abundance, but they lack the necessary quality in the final third to win Premier League matches regularly.

The reality is that Newcastle simply cannot rely on results elsewhere any more; they have to start picking up victories of the own.

With Cardiff City, who are one point and a solitary position ahead of Newcastle, to come at St James’ Park next week, the magnitude of that match cannot be overstated.

Newcastle need results, and they need them quickly - particularly with Manchester City and Tottenham Hotspur to follow the Bluebirds.