Carroll Is Gunning For Newcastle!

... assistant manager Neil McDonald has warned against pushing the big striker too hard as the club scraps for its Premier League life.

Carroll played the final 20 minutes in his side's much-needed 2-0 win over Cardiff City on Sunday, making an immediate impact as his pass teed up Mark Noble for the crucial second goal in injury time. 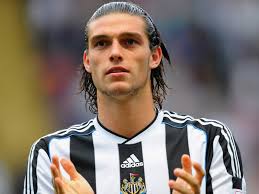 The win was West Ham's first success in eight league games, and followed two humiliating cup defeats to Nottingham Forest in the FA Cup and Manchester City in the first leg of their League Cup semifinal which saw them concede 11 goals without troubling the opposition goalkeepers.

The win eased some of the pressure on manager Sam Allardyce and moved them out of the relegation zone on goal difference.

Carroll, who had not played since his club record £15m move from Liverpool, having spent last season at the east London club on loan, is seen as crucial to their hopes of survival.

Neil McDonald: "We've got to build Andy's match fitness up but be careful not to push him too far or too fast.

"I don't think we're concerned about his foot injury and we've just got to make sure he doesn't get another injury.

"It was good to see him coming on for 20 minutes and making an impact."

The club was hoping to organise a training match for the 25-year-old England international, although he was already eyeing the next league match, a return to his hometown club Newcastle United.

Andy Carroll: "Getting back on the pitch is unbelievable.

"The next game is Newcastle and hopefully I get a few more minutes and we get a win.

"It will be nostalgic for me. They are my hometown team. I am looking forward to it - but it could have been anyone. I've been out for too long."

Kinnear, United’s director of football, has moved to dampen expectations on Tyneside in his programme notes for Sunday’s home game against Manchester City.

With a whole list of players rumoured to be on the move - Obertan, Cisse, Cabaye, Steven Taylor, Shola and Marveaux - how can one or two players keep the squad strong?

Once again, Mike Ashley is suggesting we SELL before we BUY and refuses to back the manager with hard cash.

Joe Kinnear: “Our preparation for the transfer windows is a year-round activity and at Newcastle United we plan our transfer activity based on a full calendar year as opposed to approaching each window in isolation.

“Now that we have strength and depth in most areas, as well as players within our ideal age range in most positions, our intention for the first team going forward is to sign one or two players per year to improve the squad.

“This will be done within strict financial parameters – the club will only spend what it can afford.

“We have made certain elements of our transfer policy well known.

“One example being the desire to recruit players whose futures are ahead of them, not behind, which in nearly all cases means players in their early to mid-20s, not beyond.”

Edin Dzeko and Alvaro Negredo scored as Manchester City moved to the top of the Barclays Premier League with a controversial 2-0 victory at Newcastle.

The Bosnian striker set the visitors on their way to a 10th successive win over the Magpies with an early finish and Negredo struck in added time as City extended their unbeaten run in all competitions to 15 games.

However, the home side were hugely aggrieved to see a 34th-minute Cheick Tiote equaliser ruled out by referee Mike Jones for offside.

The Ivory Coast international blasted home from distance, but after speaking to assistant Stephen Child, Jones ruled out the goal - to the fury of Newcastle boss Alan Pardew, who later became involved in an angry touchline spat with opposite number Manuel Pellegrini.

Newcastle were seeking to avoid a fourth successive defeat but the early signs were not good as City, fresh from their 6-0 Capital One Cup semi-final first leg demolition of West Ham in midweek, ripped into them from the off with full-back Aleksandar Kolarov terrorising counterpart number 13 Mapou Yanga-Mbiwa.

It took them just eight minutes to go ahead when David Silva played Kolarov in behind Yanga-Mbiwa and his driven cross was thumped home by Dzeko.

It could have been worse for the Magpies with the in-form Negredo just failing to connect with another Kolarov cross in front of goal and then looping a 15th-minute header on to the roof of Tim Krul's net.

But with Yohan Cabaye, who had started in a number 10 role behind lone striker Loic Remy, dropping deeper, the home side took a foothold in the game and gradually stemmed the tide.

Defender Steven Taylor stabbed a Cabaye corner wide, and the French international forced a fine 33rd-minute save from England keeper Joe Hart with a rasping shot from a near-impossible angle.

But the resulting corner brought controversy as Newcastle thought they had dragged themselves back into the game.

The ball was cleared to Tiote on the edge of the box and he unleashed the sweetest of left-foot strikes which left Hart rooted to the spot as it screamed into the back of the net.

The midfielder, whose last goal for the club was a spectacular long-range equaliser in a 4-4 draw with Arsenal in February 2011, set off on a joyous run, unaware that Jones was consulting his assistant.

Replays confirmed that Yoan Gouffran was one of three players in an offside position, and the pair decided the Frenchman was interfering with play, a view not shared by the vast majority of the 49,423 spectators inside St James' Park.

Pardew was certainly of that persuasion and he and Pellegrini were involved in a heated exchange as the whistle approached.

Buoyed by a sense of injustice, the Magpies returned in determined mood and Vurnon Anita forced a 48th-minute save from Hart before Remy was presented with a glorious opportunity to level.

Moussa Sissoko's pass put the striker in on goal, but as he tried to turn inside Vincent Kompany rather than shooting first time, he took a touch too many and the chance had gone.

However, City were far from done and Krul had to make a fine 55th-minute block to keep out a point-blank header from Alvaro Negredo, who had earlier fired high over on the turn.

But Hart had to dive to his right to keep out Cabaye's swerving 59th-minute attempt and then punch away the same player's free-kick two minutes later with the home side dominating.

The former Lille midfielder was waging a one-man war on Hart's goal and sent another dipping shot just over with 68 minutes gone, but it was Remy who was denied by the goalkeeper after latching on to Gouffran's cross two minutes later as Kompany and Pablo Zabaleta collided.

Yanga-Mbiwa picked up the game's sixth and final yellow card in the 74th minute for a challenge on Samir Nasri. The City player exited the pitch on a stretcher five minutes later - James Milner replaced him.

As Newcastle pushed forward, City exploited the space they left behind and Fernandinho rattled Krul's crossbar with an 87th-minute header.

Remy might have snatched a point with a header which sailed just high and wide from Cabaye's corner and Taylor saw a shot blocked by Dzeko.

However, Negredo made sure City would displace Chelsea - 2-0 victors at Hull yesterday - in the fifth of seven minutes injury time, despite Krul blocking his initial effort.