Carroll Can't Do It By Himself

Steve Bruce wanted his side to pass forward against Leicester, but they had no room to do it.

Can Andy Carroll offer something different up front? Not when Newcastle are constantly on the back foot. 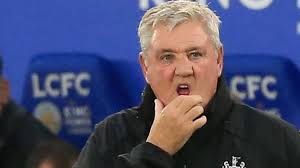 Bruce wants his side to sit back, and hit on the break ... even at St James' Park!

Take the pressure then play the long ball to Almiron, hoping he can feed Joelinton. It's simple ... and SO simple ... every manager, player, supporter and club mascot know it is going to happen.

Where it goes wrong is that Almiron has the speed ... but is so paper-thin ... a gust of wind can knock him off the ball. And defenders don't seem to have a problem stopping the supply route.

Plus the fact Joelinton isn't the fastest man out of the blocks, the ball to him is always played back from a forward position.

Do we need a focal point like Andy Carroll? But he was not fit enough to play a bigger part in the game on Sunday, and God only knows when (if ever) he will start a game.

By the time he came on, Newcastle had 10 men and Leicester were out of sight.

With someone like Carroll on the pitch, you have a different option. You know you can hit one over the top and he will be able to hold it up and allow you to build an attack that way. It relieves the pressure on you at the back too.

But you have to control midfield to make that work, and that hasn't hasn't happened once this season.

I am sure Carroll will feature more as he gets his fitness back - and Newcastle are going to need him. And by-hook-or-by-crook, they are going to have to play to his strengths when they do

Because, on Sunday's showing, there aren't that many 'strengths' in the team!

Krafth has not won me over let. He is a robot defender who does not have a defender's logic. He wants to get forward, but when he does his 'arse falls out' and he plays the ball backwards rather than play the killer ball. He doesn't have confidence as a defender ... or winger.

Longstaff was poor against Leicester. An understatement. He was like a little boy lost in a ramshackle midfield that was over-run, out-fought and out-thought.

Bruce said it all "The white flag came out!"