Can Toon Get A Win At Goodison?

Everton welcome Newcastle United to Goodison Park in the Premier League hoping to build some form under Carlo Ancelotti.

The Toffees have showed signs of improvement under the Italian but are still susceptible to poor results, including an underwhelming draw with West Ham United at the weekend.

Meanwhile, their opponents Newcastle go into this game on the back of a massive win over Chelsea which ended a four-game run without victory and drew the Magpies level on points with Everton.

Read on for our Everton vs Newcastle preview.

Dominic Calvert-Lewin was one of a few Everton players who could hold their head high during Marco Silva’s reign and the Englishman has continued his good form under Ancelotti.

The 22-year-old has scored four goals in five Premier League games for the Italian, including one in Everton’s draw with West Ham at the weekend. But it isn’t just scoring goals that makes Calvert-Lewin so important. His work-rate and aerial presence mean he can often drop slightly deeper to try and link up with Everton’s other forwards, becoming a key component.

Key stat: Dominic Calvert-Lewin (nine) has scored more goals than any other Everton player in the Premier League this season. 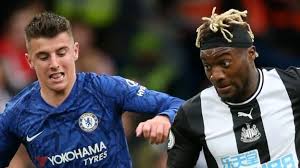 Allan Saint-Maximin was not his usual self against Chelsea but, given he has only recently come back from injury, that was to be expected.

But the Frenchman will want to get back to his best quickly, and he could start against Everton. Saint-Maximin is almost impossible to get off the ball when he really gets going, with a devastating mixture of pace and ball control. With Everton’s defence still showing signs of weakness, this could be key.

Key stat: Allan Saint-Maximin (55) has completed more take-ons than any other Newcastle player in the Premier League this season.

Alex Iwobi has missed the past few games with a thigh injury but is unlikely to be risked. Richarlison has returned to training but midweek will come too soon for the Brazilian, while Gylfi Sigurdsson will also miss out.

Jean-Philippe Gbamin and Andre Gomes are long-term absentees while Michael Keane faces a late fitness test to prove he has overcome the neck problem he picked up at the weekend.

The injuries don’t stop coming for Newcastle as Steve Bruce has confirmed Paul Dummett will miss the rest of the season with a serious hamstring injury.

Jetro Willems, who was stretchered off against Chelsea, could have played his final Newcastle match after rupturing his anterior cruciate ligament. Willems is on loan from Eintracht Frankfurt but Newcastle have not ruled out offering the Dutchman a permanent deal.