Bruce Has Us Level With The Mackems!

Well Stevie boy ... what was your worst ever result as a manager?

Guess what, he has us level with the Mackems! 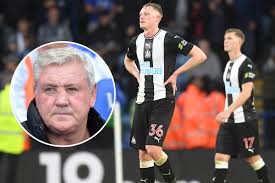 This was Steve Bruce’s joint-heaviest ever defeat in the Premier League, alongside losing 2-7 vs Chelsea in January 2010 and 0-5 vs Man City in April 2011 ... both as Sunderland manager.

It says quite a lot really, but not unexpected, since 'Fat Boy' brought in an ex-Mackem to replace crowd favourite Rafa we were sure to become a laughing stock (again!)

Isaac Hayden's red card was the 52nd occasion in which Steve Bruce has seen one of his players dismissed in the Premier League; only Arsene Wenger (78) has seen more of his players sent off in the competition.