Bruce DID Fall Out With Toon Player! 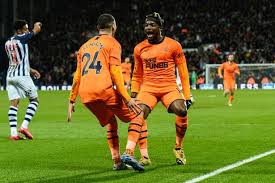 A newspaper report on Monday claimed winger Saint-Maximin's future at the club was in doubt after being dropped for Saturday's goalless draw against Burnley because of a fallout with Bruce.

But the manager categorically denied the rumours, saying after the game: "Allan was a doubt. Nonsense written in a newspaper that I have had a fallout with him.

"I don't know where that has come from. He didn't train Sunday, we were wary of him, and you have to be careful. That is why I didn't risk him. He trained well yesterday and that is the way it was."

Responding to the reporter who wrote the story, Bruce said in the post-match news conference: "Total lies, it is nonsense. I am glad your source is wrong. Are you calling me a liar?

"Your reporting is wrong. I've had no row with Saint-Maximin."

Saint-Maximin and Danny Rose both returned from Crystal Palace on the train (rather than the team coach), because of a bust up with Bruce. Supporters saw them and chatted to them.