Bruce - Toon Taunts Will Be Funny!

Aston Villa manager Steve Bruce has admitted that he’s okay with being called “fathead” and other insults by rival fans because he’s had it so often he now finds it funny. 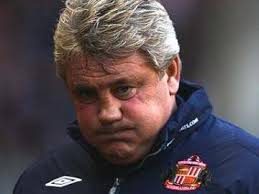 Bruce has experienced jibes and insults from rival fans for several years now and they mostly feature something to do with his looks, primarily his head.

The Aston Villa boss would go to Anfield and regularly receive humorous chants about his looks, to which he once stood up and waved back to acknowledge the Kop.

The former Birmingham City, Wigan Athletic and Sunderland manager is getting used to it though and has admitted that it doesn’t bother him anymore, simply because he finds it funny.

“I managed Sunderland so I have gone across the divide, I know what to expect,” he said, via the Birmingham Mail. “I find it funny now because I’m used to it.

“If you get stick, I take it as a back-handed compliment. I’ve had ‘fathead’, I’ve had ‘potatohead’ at West Brom, and at Man City it’s the Elephant man.

“It was funny at Liverpool one year. Just after You’ll Never Walk Alone they were singing ‘Steve Bruce has got a big fat head’. It was raining that day and after 20 years of being there I thought ‘I’m going to put my hood up’. There was a mass ovation round the place I thought ‘s*** I should have done that ten years ago’!”