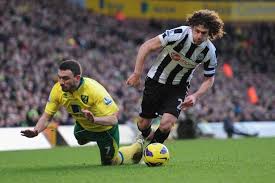 Demba Ba allowed his feet to do the talking as his fourth goal of the season fired Newcastle to a narrow victory over Norwich.

On a day when strike partner Papiss Cisse's fortune took a turn for the worse when he squandered a penalty chance, Ba produced a finish worthy of Hatem Ben Arfa's slide-rule pass to claim just a second Barclays Premier League victory of the season for the Magpies.

Ben Arfa found himself on the wrong end of assistant manager John Carver's tongue after allowing Cisse to take the spot-kick in first-half injury-time, and it took a fine 47th-minute save by Steve Harper to deny Andrew Surman an equaliser and former Newcastle boss Chris Hughton a point on his return.

The home side were once again not at their fluent best in front of a frustrated crowd of 49,402 despite making seven changes to the side which played in the Europa League in midweek, and Cheick Tiote's return as a late substitute represented a welcome boost.

Alan Pardew's side were guilty of once again starting slowly as Norwich arrived determined not to allow them to have it all their own way.

Hughton was, as expected, given a warm reception by fans who saw him drag their club back into the Premier League in the wake of relegation, and there was a similarly friendly, if less intentional, welcome on the pitch.

City might have been ahead within five minutes had Wes Hoolahan not headed straight at defender Steven Taylor after full-back Javier Garrido had played a one-two with Surman on the left and crossed.

The outlet provided by Surman and Garrido down that side prompted Pardew for the second time in a week to switch right-back James Perch and midfielder Vurnon Anita, and although that stemmed the tide to a degree, Robert Snodgrass was also prospering down the right to keep the Magpies' defence on their toes throughout.

But as the game wore on, the home side found their feet as an attacking force and with Ben Arfa causing all kinds of problems for Garrido and Davide Santon repeatedly stretching Russell Martin, they began to create chances.

They might have taken the lead with 19 minutes gone had Cisse made a meaningful connecting with Yohan Cabaye's free-kick at the near post with Perch seeing his effort from the rebound blocked.

However, they were in front seconds later after Ben Arfa produced a moment of sheer class.

The Frenchman cut inside from the left before sliding the perfect pass into the path of Ba, who calmly slotted past the advancing John Ruddy.

But to their credit, Norwich refused to fold and Mike Williamson had to be in the right place at the right time to clear Snodgrass' header off the line following good work by Hoolahan.

Cisse passed up another good opportunity 13 minutes before the break when he missed his kick from Santon's near-post cross, and Cabaye smashed the loose ball just wide, while Ba failed to make the most of more brilliance from Ben Arfa when he miscontrolled his pass in front of goal after the winger had embarrassed Surman.

But the Magpies should have extended their lead in first-half injury-time when, after striker Steve Morison had barged into Williamson inside the Norwich penalty area, referee Neil Swarbrick pointed to the spot.

Ben Arfa, who struck from 12 yards during the opening day victory over Tottenham, immediately grabbed the ball, but was persuaded to hand it over to Cisse, whose need for a goal was plain for all to see.

But the Senegal international skied his effort high over the bar, in the process earning Ben Arfa a tirade from Carver with Pardew sitting high in the stands as he served out his touchline ban.

Carver's wrath might have been incurred once again within two minutes of the restart when Hoolahan turned the ball perfectly into Surman's path to put him through on goal.

Harper was quickly off his line and the 37-year-old got down superbly to make a vital block as the midfielder attempted to lift a shot over him with the outside of his left foot.

Newcastle were struggling to find their rhythm once again, and Jonas Gutierrez had to get a block on a 53rd-minute Snodgrass effort with Santon clearing Morison's header at the far post from the resulting corner.

Ben Arfa prompted a fine diving save by Ruddy three minutes later as the Magpies stepped up a gear with Taylor and Cabaye going close in quick succession.

Williamson headed a Cabaye corner straight at Ruddy five minutes later and the keeper claimed Ba's weak 83rd-minute effort as Newcastle negotiated their way nervously, but safely, to the final whistle, although substitute Gabriel Obertan was left nursing the after-effects of a robust challenge from Michael Turner.