Are Results Easing The Pressure On Ashley? 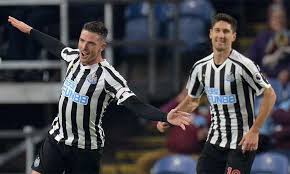 This weekend a section of Newcastle fans will step up their protests against Sports Direct tycoon Mike Ashley.

The Magpie Group and fanzines are asking supporters to take part in an 11th minute walk in.

Stay in the pub, have an extra pint, leave (they hope) big gaps in the crowd at kick off to be captured by TV cameras and photographers, and a point is made.

This is a difficult sell, as is the whole match boycott, organised for December 9 and the game against Wolves.

Three wins in a row, up to 13th place and the season looks to be turning around nicely for Rafa Benitez .

And Benitez himself knows that a rocking atmosphere is vital in inspiring his players and intimidating the opposition.

There are fanatics who want Ashley out asap, take to social media to vent their frustration, and believe direct action will work.

There are also thousands who turn up at St James' Park for a Saturday escape, and just want to see a match. Protest isn't for them.

My own view is that the current protest movement is working - but won't achieve their ultimate goal of forcing him out. Only a credible buyer with £300m+ can speed that process.

However the rumbling protests that come to a head in the next ten days are working in that Ashley has re-engaged with the club.

He's watched eight games after a 16 month stay-away. He's hosted a squad meal and visited the dressing room after wins.

There have been short meetings with Benitez, although admittedly nothing substantial discussed.

Fans' protests have hammered home the support Benitez has on Tyneside. He is trusted, loved, and pretty much everyone wants him to stay beyond his current deal which ends in June.

#IfRafaGoesWeGo is the hashtag for the disgruntled. If he does, and they do, refusing to renew season tickets next season by the tens of thousand, then Ashley loses.

Newcastle fans just want Benitez to be backed. Allowed to build. Given decent sums in the transfer market to go beyond the bargain basement and find two of three gems that can immediately elevate United consistent top half challengers.

It defies belief that this didn't happen last summer. That's why the Geordies are revolting.

So even if the late walk-in, or the boycott, don't immediately catch the eye because it is only hard core of loyalists, don't sneer.

In Ashley's thought processes - his next move with Rafa's contract, or spending in January - it must be having an impact.

It is time the potential in Newcastle United was unleashed.

Look at their achievements over the 11 yards of Ashley's ownership. One fifth-place finish aside, there's been two relegations, mediocrity, and total misery in the cups.

Compare that to more than a decade of European qualification and cup thrills. Big spending, ambition and hope. No trophies, though.

That's why the Geordies moan. The past has shown what the club can be. And they want better.