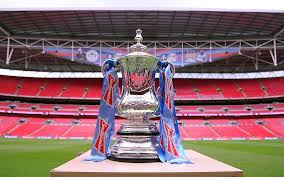 Northampton's reward if they can get past MK Dons in a third-round replay will be a visit from Chelsea while FA Cup holders Arsenal must entertain Burnley in the fourth round.

Chelsea are not the only Barclays Premier League giant taking to the road as Manchester United were sent to Derby with Manchester City told to pitch up at either Sky Bet League Two club Wycombe or Aston Villa, who drew 1-1 on Saturday.

Liverpool were held to a 2-2 draw by Exeter and the winner of that replay will entertain West Ham. Vanarama National League outfit Eastleigh, the lowest ranked team left in the competition, will host Championship side Leeds if they can see off Bolton at Ten Acres.

Harry Kane's late penalty kept Tottenham in the competition and if Spurs can do the business against Leicester in their replay, a journey to Colchester awaits.

Crystal Palace tackle Stoke in a rare all-Premier League tie while Oxford, who knocked Swansea out on Sunday, must wait to discover if they will host their League Two rivals Newport, or Blackburn.

If West Brom manage to get past Bristol City they will welcome Peterborough, Everton are tasked with visiting either Carlisle or Yeovil from the fourth tier and Watford travel north to Nottingham Forest.

Bournemouth complete the top-flight contingent and could enjoy a short trip to Fratton Park if Portsmouth can overcome Ipswich.

The fourth-round fixtures will be played between January 29 and February 1.