Another Great Away Day For Toon Army

A big away following of 2,000 Newcastle United fans (some were in the Huddersfield end) made the journey to West Yorkshire to see their side take on Huddersfield Town in the Championship. 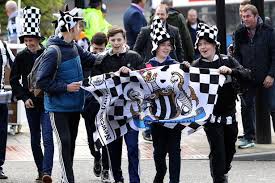 And those who made the trip for the 5.30pm kick off were not left disappointed as United ran out 3-1 winners despite only having 24 per cent possession.

The Terriers, who were third in the league and had collected 16 points from their last 18, were on top for most of the game but could not break down the United defence to capitalise much to the pleasure of Rafa Benitez .

It was United who broke the deadlock through Matt Ritchie after Nahki Wells was adjudged to have brought down the winger after just 10 minutes. Ritchie dusted himself down to take the penalty and fired home.

David Wagner, who was serving the second of a two-match touchline ban, was not happy with the decision. His side responded with a long range effort but Karl Darlow was equal to it. Just after the half hour mark Daryl Murphy double United’s lead. He latched onto a ball from Jonjo Shelvey before slotting home past the ‘keeper after the ball had spilled from his grasp.

Huddersfield came out in the second and were again on top in terms of possession but failed to create any proper chances. But with less than 20 minutes remaining they grabbed one back through Aaron Mooy after Shelvey brought down Elias Kachunga.

The Terriers tried to ramp up the pressure further but couldn’t break the United defence down. A later corner saw substitute goalkeeper Joel Coleman come up to attack it but United’s clearance caused him problems. As he came to meet Paul Dummett’s clearance, Coleman misjudged the ball and landed a poor header, allowing Dwight Gayle to tap home into an open goal.

The away end, which numbered 1,900, were sent into raptures and applauded their team – as they had done throughout – off the pitch.