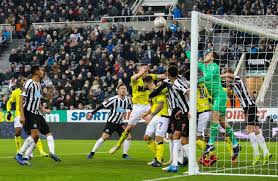 Blackburn manager Tony Mowbray told BBC Sport: "We gave an amazing effort. That's what we give every week. There's a camaraderie amongst the players and we worked hard to get a result.

"I couldn't see Newcastle scoring so the penalty was a blow. It was soft, and I think it was a penalty, but we live to fight another day. It'll be interesting to see what side they play in the replay now.

"It was a great header from Bradley Dack and he worked his socks off. We told the players to test themselves against a Premier League side and Bradley should want to test himself against Premier League footballers.

"He took his goal well and worked really hard today. It's his first season in the Championship and he's bedding in well."