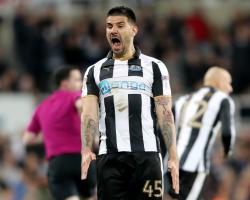 The Magpies secured their return with a 4-1 Sky Bet Championship victory over Preston on Monday evening, which means they will join Brighton in next season's top flight.

They became just the second relegated side in seven years to claim an automatic promotion berth at the first time of asking, and Serbia international Mitrovic has put that down to the bond formed within a dressing room since a traumatic conclusion to the last campaign.

That's the reason why we have made it.

"I didn't believe it when they told me that this league is so hard but, for me, this league physically is even harder than the Premier League, so it's a really big achievement for this team, for these guys.

"We have to finish these two games and we still have a chance to win the league, so we will try

But the most important thing is that next year we will play Premier League football here, and that's unbelievable."

Mitrovic, a ÃÂ£14,5million signing from Anderlecht, has played a frustratingly peripheral role for much of the campaign and has contributed only four league goals.

However, the 22-year-old remains a favourite with the fans, 50,212 of whom turned out to witness the club's moment of destiny.

Mitrovic said: "They are amazing, they deserve the best, the best football, so we did everything this season to bring them again to the Premier League.

"I'm really happy that next season they will see here the big clubs like Chelsea, Liverpool and Manchester United.

"These fans deserve the best, so hopefully next season we will be able to do something special

Unlike some of the club's big money signings, Mitrovic stayed on board to help in the quest for a return to the Premier League and while he has not played as often as he would have liked, it has proved hugely educational.

Manager Rafael Benitez drafted in strikers Dwight Gayle and Daryl Murphy during the summer as he looked for goals and Championship experience, and the Serb believes he will be a better player for working alongside both men.

He said: "Personally, I have learnt how to play more physically

I have learnt a lot of things because I have had a long time to look.

"I haven't played every game, so I have had a lot of time to learn next to Dwight and Murphy

They are two really good strikers, different types, so I can learn from both.

"Like I said, I haven't played, I haven't scored goals, but I have learnt a lot from the guys and from this league

It's been very hard and this will make me a better player for sure, and in the future with this experience I have had in the Championship, I can play easily in other leagues.

"I didn't really expect a hard league like this."