A New Masterplan From Rafa?

Newcastle’s collective effort has been in evidence all season, and is a big factor in their current ten-game unbeaten run. For all the quality in their ranks, it is rare to see the Magpies outworked by an opposition, and away from St James’ Park, their organisation and commitment have really come to the fore. 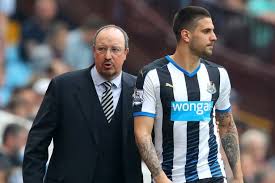 Whereas the Magpies have occasionally found it difficult to break down their opponents at St James’, particularly when teams have sat back and packed defenders behind the ball, they have excelled on the counter-attack in their away matches.

Saturday’s win at Huddersfield was a case in point, with the home side enjoying more than 70 per cent of possession, but the visitors creating by far the better chances as they struck clinically on the break.

Tonight’s game could follow a similar pattern, with Jaap Stam’s Reading side likely to adopt a positive approach as they look to close the eight-point gap that currently separates them from second-placed Brighton. They beat Wolves at the weekend, but could play into Newcastle’s hands if they commit too many players into their opponents’ final third.

“Now, teams are more settled down and tend to have their own style. We have a very good balance because we score goals and don’t concede too many.”

Having lost at Fulham on the opening weekend of the season, Newcastle claimed their first away win for more than nine months when they ground out a 1-0 victory at Bristol City, and while the success at Ashton Gate might not have been the prettiest, it established a template that Benitez’s side have followed for much of the campaign.

“It was an important win,” said Benitez. “It showed the fans this team can win away. For half the squad (who were signed in the summer), it was not a problem, but it was still a very important result because Bristol were doing very well at the time.

“It was a difficult game for us, and we had to change formation from 4-3-3 to 4-2-3-1 to manage the space in front of the centre-backs. It was a great win, with a great counter-attack against a team that was pushing.

“It was really important for our belief to convince the players that we could win away. For some of the players, it was, ‘Oh, we can do it’.”

Dwight Gayle scored the winner at Bristol City, and the striker is available again this evening, although he could once again find himself on the bench given Daryl Murphy’s effectiveness in the opening hour at Huddersfield.

“If I am asking him (Gayle) now, he would say, ‘Yes, I am ready to play’,” said Benitez. “But we have to decide because we have to watch him in every training session and monitor him carefully. But in his head, I’m sure that he’s ready.”

With Gayle and Murphy in the squad, Aleksandar Mitrovic will once again miss out on a place in the match-day 18.

“When Mitrovic was playing, he was trying to do his best,” said Benitez. “But Murphy has done very well and we don’t have too many places for strikers, so we have to leave Mitro out.”