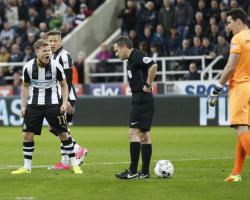 Dwight Gayle dashed into the penalty area before Matt Ritchie scored from the spot.

Rules of the game indicated Newcastle should have been allowed a second chance from 12 yards, and referees' body Professional Game Match Officials Limited (PGMOL) confirmed Stroud had made an error.

Here, we look at other high-profile mistakes by referees.

Watford's John Eustace knocked the ball wide of his own post and out for a corner, but Attwell, advised by his assistant, gave Reading a goal.

Spain striker Alfonso went wide and beyond goalkeeper Pavel Srnicek before throwing himself down, and Dallas was left to later watch replays in disbelief

He later described it as his worst ever decision, saying, ''It honestly took me a while to get by that''.

Dundee United striker Paddy Connolly cracked the ball in from inches out, during a game at Partick in 1993

Connolly's shot, however, struck the stanchion at the back of the net and bounced back out into the penalty area

Referee Mottram missed the ball going over the line, and even failed to see Partick defender Martin Clark pick up the ball and hand it to goalkeeper Andy Murdoch

His team-mate Alex Oxlade-Chamberlain should have seen red instead for tipping a shot round a post with his hand.

Mendes had been out of luck the previous year when neither Clattenburg nor his assistants spotted that Manchester United goalkeeper Roy Carroll had spilled the Portuguese midfielder's long-range shot well over the line and no goal was given.

Thomson appeared to send off the wrong Dundee United player, Paul Paton, after ugly scenes broke out in the match against Celtic at Tannadice in March 2015

Paton's team-mates Nadir Ciftci and Calum Butcher could have had no complaints had they been red-carded, with bystander Paton apparently a wholly innocent party.