You Never Know With Newcastle United!

After the international break, Newcastle travel to Chelsea on 19 October (kick-off 15:00 BST). 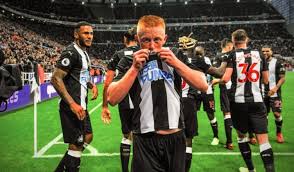 Yes it looks formidable on paper, but so did the visit to Tottenham earlier in the season, and look what happened there!

On Sunday Steve Bruce responded to his critics after guiding Newcastle United to a remarkable win.

The club moved off the bottom of the Premier League yesterday after Bruce changed his tactics.

“It’s the biggest insult of the lot,” said Bruce. “I don’t think you can manage 400 games in the Premier League, 550 in the Championship, play 980 times and not be a little bit organised.

"If people just say ‘he’s not good enough’, then fine, I understand that. When there’s criticism of tactics or whatever, it’s always the thing that bears with me more than anything.”

But, Newcastle United are what they have always been, the most unpredictable club on the planet!

In 1972 they lost that infamous FA Cup tie against non-league Hereford. But few remind us that the next game we won at Old Trafford.

Iam McFaul's last game as manager - Liverpool were top and we were bottom - but we won 2-1 at Anfield with a certain Brazilian scoring the winner.

Eeeee the fun of being a Newcastle fan.