Would Mitro Do Better Than Joelinton?

Aleksandar Mitrovic has backed Newcastle United's misfiring strikers to find their goal-scoring touch and keep the club in the Premier League. 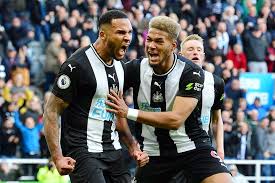 Aleksandar Mitrovic spoke to the Shields Gazette after Fulham's 0-0 draw with Middlesbrough.

Despite holding a better points total of nine compared to last season’s three, much has been made about the Magpies’ struggles in front of goal in the opening 10 matches.

An attacking force worth an estimated £77million consisting of Miguel Almiron, Allan Saint-Maximin and Joelinton has brought just six goals - a tally only worsened by bottom-of-the-table Watford.

Mitrovic, meanwhile, is in red-hot form for Fulham with his 11 goals making him the Championship’s top scorer.

The Serbian, however, knows all about the pressures of leading the United frontline after a big-money move, having struggled for goals himself after his £13million move to Tyneside from Anderlecht in 2015.

That season ended in relegation, but Mitrovic is backing £40million man Joelinton and co to come good despite United hovering just above the relegation zone again.

He told The Gazette: “I’m sure they will improve.

“They have a good team and good strikers. I hope they will stay up this season.”

Mitrovic returned to the North East on Saturday to play a vital part in the Fulham's draw with Middlesbrough as they played over 70 minutes with 10 men.

Asked if his return to the region brought back memories from his time on Tyneside, Mitrovic smiled and told the Gazette: “Yeah, it’s freezing!

“No, it is always nice to come back. There are nice people here and big clubs here - like Newcastle.

“It is a great place to play football. I really enjoy coming back.”

Mitrovic cut a popular figure with the United supporters, however was frozen out by Rafa Benitez, which ultimately led to his £20million departure last year.