Why Do Toon Fans Hate Liverpool?

For years it was Man Utd ... and Fergie's ranting and raving that made them the most hated club in the land. 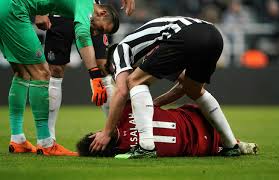 But is it the Scouse TV pundits that get to us these days, because ... no doubt about it ... the Geordies do NOT like Liverpool these days.

Lineker played for Barca and Everton, perhaps he deserves to have an opinion.

As for the Scousers representing England ... they represent LIVERPOOL ... not England. How many English players were in their team on Wednesday? Where are the three lions on their shirts?

We, as football supporters, support ONE team. Man Utd, Chelsea, Spurs, Liverpool ... they mean nothing to Newcastle supporters!

There were scuffles around the ground last night, as Liverpool fans got tickets in the home section, and the goading from the 400 in the "posh" section makes us wonder why the club sold them the tickets in the first place!

The visitors twice took the lead in a game they could not afford to lose with goals from Virgil Van Dijk and Salah.

But Christian Atsu's equaliser before the break and Salomon Rondon's after it ensured the sides were locked together with just four minutes remaining.

It was then that Origi climbed to meet fellow substitute Xherdan Shaqiri's disputed free-kick and glance a header home off defender Jamaal Lascelles to claim three points which took them two clear of Manchester City, who face Leicester on Monday.

Jurgen Klopp said: "Credit to Newcastle, that was - wow! If any people would doubt the teams that don't play for anything any more, that they are halfway on the beach already, that was really the opposite.

"Is there any history between Newcastle and Liverpool that I don't know about? The atmosphere was like something happened in the past. The boys again were ready to face it and ready to deal with it, and that's brilliant."