What Sort Of Player Is A Priority Signing? 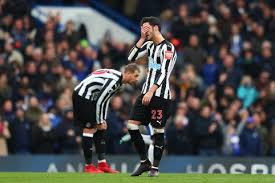 The January window is now into it's third week but still Newcastle United have yet to make any additions to a squad that is already close to breaking point.

With injuries hitting their midfielder and defence - Mo Diame, Jonjo Shelvey, and Paul Dummett all missed the Chelsea game - the need for new players is there for everyone to see.

Rafa Benitez is keen to bring in a left-back, a number 10 and a winger but despite his hope that deals could get done early in the month, he still waits for his first January signing as Newcastle manager.

We've asked our NUFC writers what they think United need this January, and if Benitez will get it.

What Newcastle United need to do as a priority?

Lee Ryder: "For me Newcastle need more fire power in attack because if Rondon gets injured they have no serious threat to cover him. Joselu is devoid of confidence and not capable of carrying the hopes of the club in a relegation battle and Perez isn't a recognised striker in my book. After that they need a winger and defensive cover."

Chris Waugh: "Sign an attacking-midfielder. Realistically they need at least three additions this month, but an attacking-midfielder has to be the priority. Newcastle are only going to survive if their home form drastically improves because they have to host five of the other six teams in the bottom seven at St James' Park before the season is out.

"In order to start winning on Tyneside, they need to add greater creativity and guile; far too often the Magpies appear directionless on home soil and they seem to lack ideas in the final third. An attacking-midfielder - be it a winger with pace and trickery, or preferably a No 10 with subtlety and inventiveness - appears to be the key to addressing the Magpies' St James' Park woes. Salomon Rondon has shown he can score the goals, but he can only do so if he receives the service necessary to do so."

Andrew Musgrove: "Sign a No 10. United need a host of thing this January but for me the key position is that No 10 role - someone who can come in and push Ayoze Perez for his starting place. It won't be cheap, even more so given the fact it's January but Benitez needs to be given the number 10 he desires."