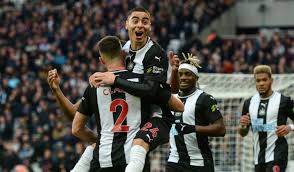 Miguel Almiron produced arguably his best performance in a Newcastle United shirt on Saturday and West Ham United winger Robert Snodgrass has admitted his side couldn’t deal with the jet-heeled Paraguayan international, while speaking to the club’s official website.

It is fair to say Newcastle fans are yet to see the best of a player who became the club’s record signing in January when he arrived from MLS outfit Atlanta United for £20 million.

But, while Almiron is yet to produce either a goal or an assist in 21 Premier League games, the 25-year-old did offer a timely reminder of his game-changing abilities at the London Stadium.

Almiron’s rapid pace tore a sluggish West Ham defence apart as Newcastle secured a shock 3-2 win in the capital and Snodgrass, who pulled one back for the Hammers in stoppage time with a brilliant volley, has admitted that Manuel Pellegrini’s side simply couldn’t deal with the Magpies’ number ten.

"Newcastle sat in and made it hard for us,” said the Scotland international.

"They kept hurting us on the counter-attack with their No 10 who was a threat throughout, as was Almiron with the pace. They did it maybe four or five times and could have caught us on the counter.”

Forget the narrow wins against Manchester United and Tottenham, this was Newcastle’s best display in the Bruce era.

Ciaran Clark, Federico Fernandez and the inspired Jonjo Shelvey were all on target for a team who had previously scored just five times in ten games. But, in truth, they could have scored even more had Almiron and the rapid Allan Saint-Maximin not spurned glorious first-half chances.