Was He Really In Line For Toon Job?

A "new and improved" Jose Mourinho says he is taking a more humble approach to management, saying he has learned from his mistakes as he prepares to lead Tottenham towards challenging for silverware. 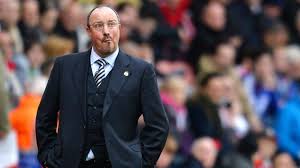 The man was tipped to replace Rafa (right) last summer, but not many Newcastle fans believed it was ever going to happen.

Mind you, this is the guy who once said "I could never manage Spurs, because I love Chelsea so much."

A "relaxed, motivated and ready" Mourinho claimed that Spurs could win the Premier League next season under his guidance, but that big statement did not come as part of the usual bravado we've seen from Mourinho in previous positions.

Mauricio Pochettino had barely cleared out his desk following his sacked before Mourinho was installed as his successor, as Daniel Levy got the big-name coach he craved to elevate his side into the upper echelons of the football pyramid.

11 months after being sacked by Manchester United, Mourinho claims he is a new and improved version of his former self, and certainly showed a different approach as he claimed everything now was about his players and not about him.

"I think I am new and improved. I have to believe so," Mourinho said in his first press conference as new Tottenham boss.

"I always thought that these 11 months were not a waste of time. They were months to think, to analyse, to prepare. You never lose your DNA, you never lose your identity, but I have time to think about many things. During my career I have made mistakes. And I'm not going to make the same mistakes.

"I am stronger, I am relaxed, I am motivated, I am ready and I think the players felt that in two days. I am ready to support them, this is not about me. It is about the club. I am here to try and help everyone."

"In your career - not only your career but in your life - you go through periods, and I'm in a period where it is not about myself at all. It is about my club, my club's fans, my players. It is not about me. I am here to try and help everyone."