Toon Could Get Mourinho Sacked! 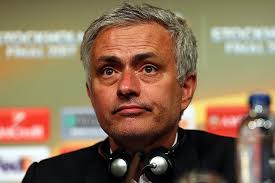 Jose Mourinho admits it would be unacceptable for Manchester United to go five matches without a win.

All is not well at Old Trafford right now, with off-field issues compounded by poor performances during their worst start to a league campaign in 29 years.

United are closer to the relegation zone than Manchester City and Liverpool at the top of the Premier League as they prepare to welcome Rafael Benitez's embattled Newcastle.

Mourinho is already on his longest winless home run in management and Saturday evening's eagerly-anticipated match could see United go five matches without a victory for just the second time this century.

When it was put to the United manager that this kind of run for a club of this size is not acceptable, he said: "Yes, I accept (it is not good enough)."

Mourinho sat motionless when then asked if he could assure fans that he was doing everything he can to try and turn things around as a tense press conference ended abruptly.

Scheduled at the earlier than usual time of 8am, the broadcast section involved six questions and started with one asking why things are not working out as he would like.

"For many different reasons," Mourinho said, who refused to expand on that answer after an awkward pause.

The club's press officer requested that journalists moved onto the game this weekend, when old foe Benitez is looking to secure Newcastle's first league victory of the campaign.

"I know we are in the beginning of October and we look to tables all around Europe and in many of the leagues the tables in September, October, they don't reflect what is going to happen in a few months later or even in the end of the season.

"But we are in a position that we can do much better than that and to do that we need points - points that we lost especially in the last two Premier League matches, with one point out of six.

"And we know that to improve that position, we need to win these three points.

"But we know that our opponent for different reasons also need the points.

"Very, very, very good coach, a team that is always very well organised against especially the teams of the first part of the table, where their manager is very bright on his analysis of the opponent's qualities and to try and stop them.

"The results they had against the top teams didn't get them points yet this season but gave them very, very close results and very difficult matches for the opposition, so we expect a difficult match."

Ander Herrera, Marcos Rojo and Jesse Lingard remain absent through injury, but Ashley Young comes back into contention for the Old Trafford clash.

"Yeah, that's true," Mourinho said of the need to repay the fans. "Only one defeat at home all season, only one defeat in the last seven matches.

"But not victories at home in the past three matches - three draws.

"Not the feeling of the defeat, but not the happiness of the victory.

"So, yes, it is important for us to try and win this match on Saturday."